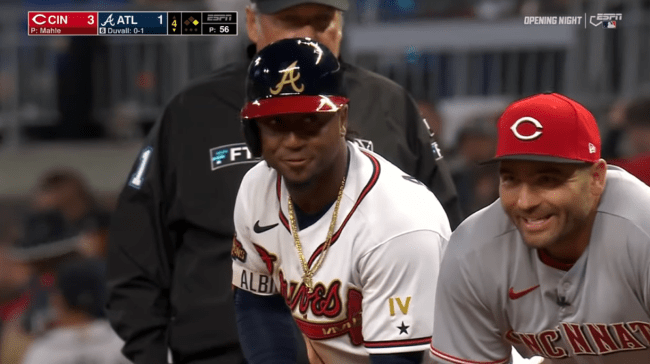 In case you missed, Major League Baseball is back. Tuesday was Opening Day for many teams, including the Cincinnati Reds and Atlanta Braves who faced off at Truist Park.

As a part of the day’s festivities, during the broadcast of the Reds and Braves game Tuesday night, Cincinnati first baseman Joey Votto was mic’d up so he could talk to the announcers in the ESPN booth.

In the fourth inning, Joey Votto, out of the blue, informed the announcers that he was thinking of getting a gold or a diamond tooth.

So when Ozzie Albies smacked a single and spent a large portion of the inning on first base they asked Votto to see what the Braves second baseman thought of the idea.

“Ozzie’s not dealing with a midlife crisis like me,” Votto joked (but not really… case in point below). “Ozzie’s a young buck, nothing but a bright future.”

“Hey Ozzie, what do you think about me getting a diamond tooth?” Votto asked Albies.

“Go for it,” Ozzie replied.

“They told me to ask you,” Votto then told Albies. “I said I wasn’t going to ask you. You’re much too young. I’m midlife crisis guy.”

Baseball fans couldn’t get enough of the conversation between the duo they didn’t know they needed.

Watching Joey Votto talking baseball during the game is the highest form of entertainment. This will get more people interested and allow the players to show their personalities. I absolutely love it! More Ozzie Albies!

🇨🇦 Joey Votto speaking with the broadcast crew WHILE holding Ozzie Albies on 1st base is golden television.

I wish I was friends with Joey Votto and Ozzie Albies pic.twitter.com/78EIgGPPzb

mic'ing up more players like joey votto and ozzie albies is how u grow the game, just a psa @mlb