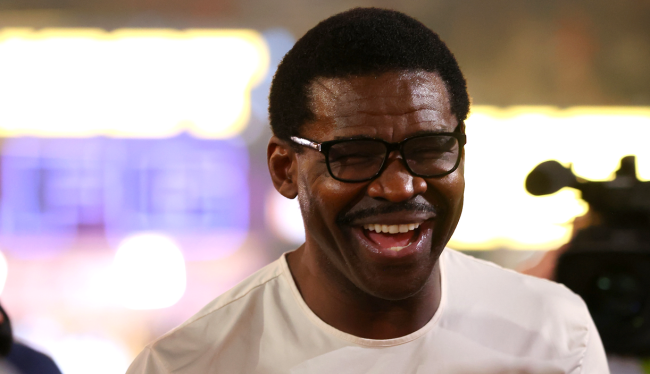 Hall of Famer Michael Irvin, who was stone cold sober when he said he thinks the Dallas Cowboys can go undefeated this season, tried to play peacemaker while out at a bar earlier this week.

Reportedly, the wild bar brawl took place around 10 p.m. in the evening at Knockout Sports Bar near Dallas. The Playmaker was in town after filming First Take earlier in the day, still wearing the captain’s hat that he wore on the broadcast. The show was filmed on a yacht on the Hudson River in celebration of Stephen A. Smith’s return to the show.

According to TMZ, Irvin was playing pool with a friend when a man walked up to him to ask for a picture with former Cowboys star.

Witnesses reported that Irvin’s friend appeared to be annoyed by the request and told the guy to beat it. That’s when things got heated between the two men.

Irvin, sensing things were about to get out of hand, tried to step in and calm the situation, even giving the picture-seeker a hug.

Despite Michael Irvin's best efforts to keep the peace — bar patrons still got involved in a wild fistfight near the Hall of Famer in Texas on Monday … and the crazy scene was all captured in a video obtained by TMZ Sports. https://t.co/rXmzp5RqkL

Despite his best efforts at keeping the peace, Michael Irvin’s friend and the fan still got into a fight

It wasn’t enough apparently as the guy still took a few swipes at Irvin’s friend, landing more than one punch to his face.

At that point, bouncers at the bar hopped into the fray, eventually pulling the men apart.

TMZ reports that while all of this was going on, Michael Irvin was on the other side of the sports bar talking to a waitress. He then left the premises shortly after the melee.

Police were reportedly never called and said that they were not investigating the incident.

Watch how it all unfolded below…

I need to walk around with a Captain's hat. How cool is that?

I’m still laughing cause bro still got that sailor hat on from First Take 🤣 https://t.co/O9OUR3GrHV

Hehe… knock-outs. I don’t think they could have found a more appropriate place to throw hands if they tried