Michael Irvin Nearly Drowned In His Own Sweat While Debating Stephen A. Smith About The Cowboys And The Internet Was In Awe 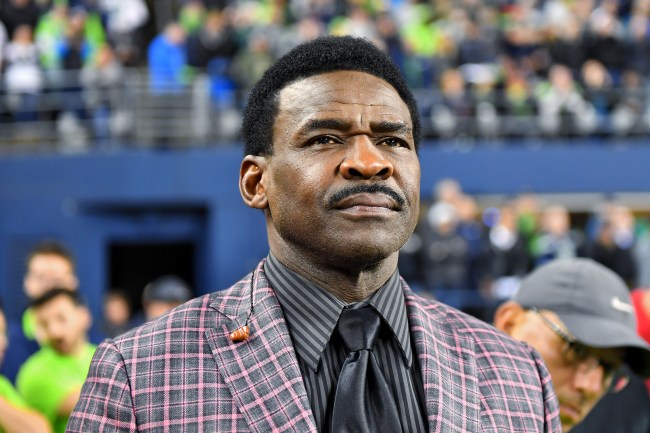 Either ESPN’s studio is hotter than a two dollar pistol or Michael Irvin just snorted all the cocaine in San Juarez because he was wetter than an otter’s pocket on the latest episode of First Take.

The three-time Super Bowl champion was nearly drown in his own sweat when debating the resolve of the Dallas Cowboys with Stephen A. Smith.

I’ve posted the entire seven-minute segment below, but if you want to avoid a panic attack, let me summarize each analysts argument.

Stephen A. Smith: The Dallas Cowboys are certainly not Super Bowl contenders simply because they beat the Eagles 37-10. They have won like three playoff games since Irvin suited up in 1995.

Michael Irvin: THE 4-3 COWBOYS ARE THE BEST TEAM TO EVER PLAY THE GAME BECAUSE THEY ARE CURRENTLY IN FIRST PLACE IN THE NFC EAST (a conference with the Giants and Redskins) AND ALSO DOES ANYONE HAVE A CIGARETTE.

Eventually, Molly Qerim did God’s work by demanding that someone bring Irvin a towel and maybe an interventionist.

The internet was genuinely concerned about Irvin’s sweating problem. Just kidding, the swam in his saline.

Michael Irvin up there sweating like he snorted two huge rails and then ran to the studio from his house. pic.twitter.com/dIWlxpJhkc

Every time Michael Irvin gets on @FirstTake pic.twitter.com/9JQscWwm74

so nobody’s gonna talk about Michael Irvin on National TV sweating like a Rotisserie chicken pic.twitter.com/9enwoBCCFV

Michael Irvin is me when the teacher asks a math question in class and I was turned around talking to my friend pic.twitter.com/4Peuh3B5rZ

So ESPN does not drug test guests prior to being on air. Michael Irvin May have left some cocaine in the green room

How come Michael Irvin is the only person Stephen A doesn’t ask if they’re smoking crack?

Michael Irvin is on #FirstTake sweating like Patrick Ewing in the 4th Quarter of a playoff game. pic.twitter.com/hxxZCYsdlz

Thought and prayers go out to Michael Irvin’s undershirt. Had a good run.