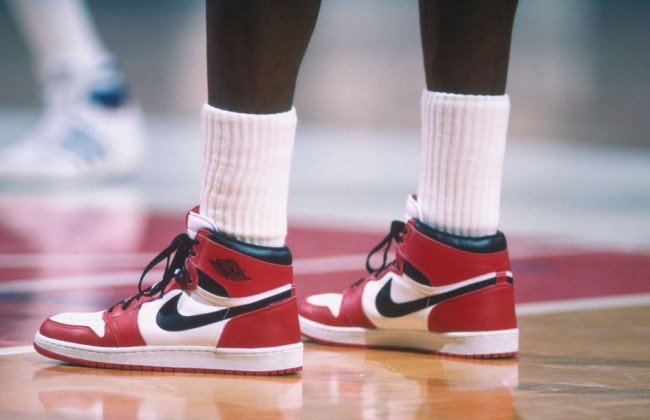 I’ve never really been able to get too deep into the world of shoe collecting, and while I’d love the opportunity to become a sneakerhead, being a 6’10” guy with size 16 feet serves as a bit of a barrier to entry.

The last time I was even able to buy a pair of shoes in an actual store was early last decade when I entered the doorway hidden behind a Snapple machine at Bodega in Boston and asked if they had anything in my size, fully expecting the employees to laugh at me the same way the guys at the toy store in Jingle All the Way did at Arnold Schwarzenegger when he asked if they had any Turbo Man dolls in stock.

Much to my surprise, a worker went into the back and emerged with a pair of KD 4s that Kevin Durant had personally delivered under the strict instructions they sell them at retail to a similarly sized person like myself. Did I have around $20 more in my bank account than the shoes cost? Yes. Yes, I did.

However, I still picked them up and Michael Cera eventually complimented them at the screening of a Jonah Hill movie I went to so I’d say it worked out in the long run.

The sneaker industry rakes in tens of billions of dollars in revenue on an annual basis and it’s estimated around a couple of billion dollars changes hands on the resale market every year and analysts only expect those numbers to continue to escalate.

There are plenty of factors that led to the current footwear landscape but I’d argue Michael Jordan deserves a sizeable chunk of the credit when it comes to sparking the world’s sneaker obsession after he signed with Nike and launched the iconic Air Jordan brand.

However, it turns out His Airness came very close to not sparking the basketball shoe revolution, as his longtime agent David Falk recently sat down for a chat on The Boardroom and revealed Jordan was initially very hesitant to sign a contract with a company that wasn’t considered a major player at the time (for the record, Nike currently has a market cap of $156.2 billion).

Falk—who had previously negotiated a $1.2 million contract between James Worthy and New Balance—said most players were lucky to make $100,000 a year via shoe endorsements in the 1970s and early ’80s but that none of them had managed to get their own signature sneaker.

Of course, that all changed with Jordan (thanks in no small part to the publicity he generated with the “banned” Air Jordan 1s). While his shoes may be incredibly sought-after today, MJ didn’t appear to have much faith in Nike when Falk tried to sway him to sign, as the agent said, “He didn’t know anything about [them], didn’t like the shoes, didn’t want to go.”

Jordan ultimately inked a five-year, $500,000 deal and reportedly now makes upwards of $100 million annually from royalties alone, so I think it’s safe to say it worked out pretty well for everyone involved when everything was said and done.