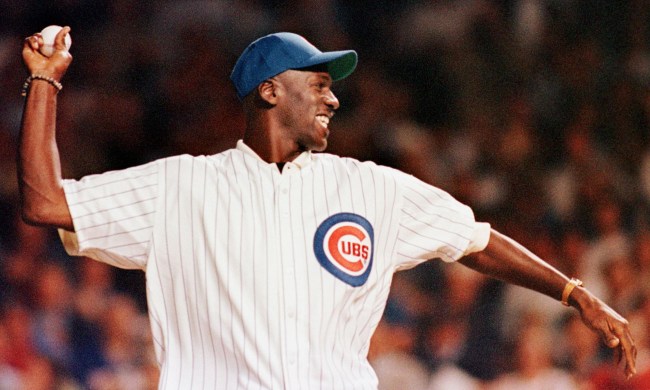 As a diehard Michael Jordan fan growing up, I had pretty much everything you could imagine to show my adoration for the former Chicago Bulls legend. Three jerseys. A new pair of Air Jordans nearly every year. Posters hanging on my bedroom wall. All the behind-the-scenes videos about his life. You name it, I basically had it.

But there’s some Jordan memorabilia out there that is so rare that it’s worth thousands of dollars. While you might think it’s a game-worn jersey or sneakers from some of his dominant performances, there’s something that’s fetching a helluva lot of money for being super rare — even it it’s got a ridiculous asking price. So what is that item I’m talking about? A baseball that MJ signed when he was a mere teenager, which is currently up for auction right now for at least $2,500; I shit you not.

Last month, @GoldinAuctions sold a ball signed by an 8-year-old Derek Jeter for $36,000. The auctioneer now has a baseball signed by a 13-year-old Mike Jordan up for sale. pic.twitter.com/qcdhBYIjmd

According to CBS Sports, a sports auction site called Goldin Auctions is selling the baseball that Michael Jordan signed at 13 years old, and includes a letter of authenticity from Jordan’s former baseball coach, Richard Neher, while also coming with the little league roster and a picture of the team. Kind of weird, right? Well, if you’re obsessed with MJ, this could be yours — for a couple thousand bucks.

As of this post, the signed baseball has a bid of $3,250, but, with 24 days left in the auction, I imagine the thing going up a few thousand more. For reference, I bought a 1998 Volvo 10 years ago for $4,500 and drove that thing into the ground before selling it three years later — so, yeah, as the headline states, this Jordan-signed baseball is the price of a crappy used car.

Here’s part of the description of the Michael Jordan signed baseball from Goldin’s website.

It is the sport that pulled Michael Jordan away from basketball. America’s pastime baseball was always a part of the great Michael Jordan’s sporting legacy. Already a superstar basketball player in high school, Jordan was an excellent baseball player, so much so, his father – the late James Jordan hoped his son would become a professional baseballer. Like many young boys in the mid-1970’s, Michael Jordan played baseball during the summer and what he have offered here is one of the earliest, if not the earliest known Michael Jordan signature. This offered Little League Horsehide Cover stamped baseball was signed in 1976 when Jordan was playing in a Babe Ruth League in Wilmington, North Carolina for Parkers Food Store. Jordan, along with the rest of his teammates, signed this ball to his coach Richard Neher. Jordan’s name was printed by him under the coach’s name in blue pen on a side panel. Handwritten in black pen upside down to Jordan’s signature reads “Pam Beasley 1976 Won 11 Lost 3”. An additional “1976 CHAMPS” is penned in black pen on another side panel.

Look, having a little piece of sports history is great and all, but paying thousands of dollars for a baseball that a teenage Michael Jordan signed is a little bit much. Like, really, why does anyone care that MJ and his little league teammates went 11-3 in 1976? But the fact that a Derek Jeter ball sold for $36,000 just last month is proof there’s a market for this type of shit, so kudos to the highest bidder of the MJ ball.