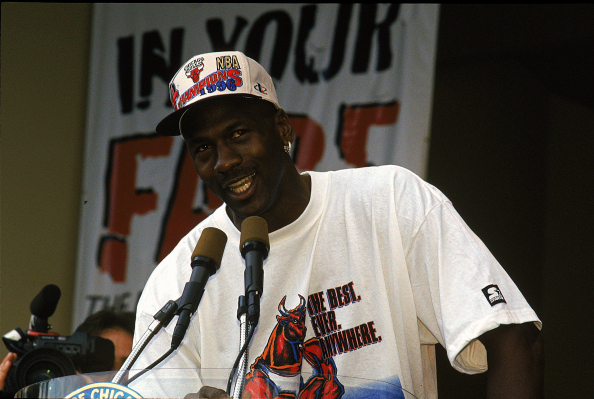 When you think about the most popular athletes of all-time, Michael Jordan’s name undoubtedly sits atop the list. Sure, others could make an argument, but, during the ’90s — and even to this very day — nobody had it like MJ did. Hell, the six-time champ even had to get grocery stores to open for him after hours in order to get his shopping done during his heyday, showing just how impossible it was for Jordan to be a “normal” guy.

Millions of people were reminded of how massive of a following Jordan and his Chicago Bulls teammates’ had during their championship run thanks to The Last Dance — the ESPN documentary recapping those great teams. And, while we were given tons of stories from guys about Michael Jordan’s competitiveness and some of the ways he found motivation to completely dominate opponents, not everything made the final cut.

For instance, one of the stories that was edited out came from former head coach Pat Riley, who allegedly was booted from a Presidential Suite in a hotel in Hawaii in 1992 because of Jordan. No, seriously, that’s how deep the rivalry between the Bulls and Knicks ran back then.

According to The Last Dance‘s director, Jason Hehir, Jordan was seemingly so much more popular and had so much more pull with the staff that, upon his arrival to the hotel, Riley was asked to pack up his bags and choose another room. Appearing as a guest on the Pushin’ Thru podcast with Tate Frazier and one of MJ’s former teammates, BJ Armstrong, here’s the story Hehir said Riley told (but, sadly, didn’t make it into the actual documentary).

Hehir claims the incident was told to him by Riley while they were filming The Last Dance, and that the former head coach mentioned it happened following the 1992 season. If that’s all true, then Michael Jordan did Riley dirty AF twice in a few months, as his Bulls knocked out the Knicks during the ’92 playoffs — where he then led his Bulls to a second-straight title — and followed it up by pushing the then New York coach out of his luxury hotel room.

Making this even funnier is how Jordan didn’t just get Riley moved from the nicest room in the joint, but then mocked him by waving from the balcony to really stick the knife in even deeper. Man, MJ really was ruthless in every sense of the word.

It’s stories like these that make Michael Jordan the unrivaled GOAT. Sure, on the hardwood the dude dominated and won six titles in his six NBA Finals’ appearances, but he had a relentless competitive streak that never got turned off. From the golf course to the casino to, even decades later, talking trash about former opponents, Jordan was always out to get the best of other people no matter what it was — and Riley was once reminded of that in a hotel in Hawaii of all places.