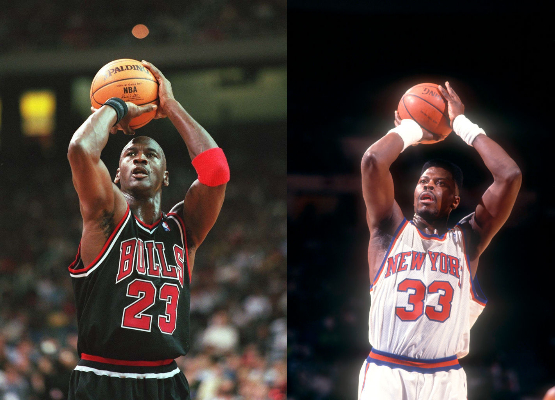 Two of the biggest competitors on the hardwood became bitter wrestling rivals despite being teammates. NBA legend Patrick Ewing suffered a twisted neck at the hands of Michael Jordan that almost caused the New York Knicks center to be sent home before a big game.

The year was 1984, two “amateurs” by the names of Michael Jordan and Patrick Ewing (perhaps you’ve heard of them) were making their Olympic debut. But Ewing almost got sent home because of some horseplay.

“He [Ewing] and Jordan are roommates,” the then-assistant coach for Team USA C.M. Newton told then-Notre Dame head coach Digger Phelps, according to Doug Haller of The Athletic. “They were wrestling in their room, and Ewing has a twisted neck.” The 6-foot-6 Jordan did a number on the 7-foot-tall Ewing, who couldn’t move his neck the next morning when he woke up.

Fiery Team USA head coach Bob Knight wanted to send the Georgetown center home because of the rough-housing. But Phelps, who was a friend of Knight and was working as a basketball analyst during the 1984 Olympics, told the iconic Indiana Hoosiers coach that the USA team absolutely needed Ewing’s shot-blocking prowess to anchor an imposing defense. Knight wisely agreed with Phelps and kept Ewing on the roster.

“So I sat out, man, Coach Knight was mad,” Ewing said. “But only at me. Michael? Nothing happened to him.”

“Nothing ever happened to Michael,” Ewing said of his Dream Team teammate.

Ewing averaged 11.0 points per game during Team USA’s run to the gold medal and topped the squad with 18 blocks in eight games during the Games of the XXIII Olympiad. Jordan led Team USA with 17.1 points per game, and the United States would win gold at the 1984 Summer Olympics in Los Angeles, despite Ewing being a pain in the neck.