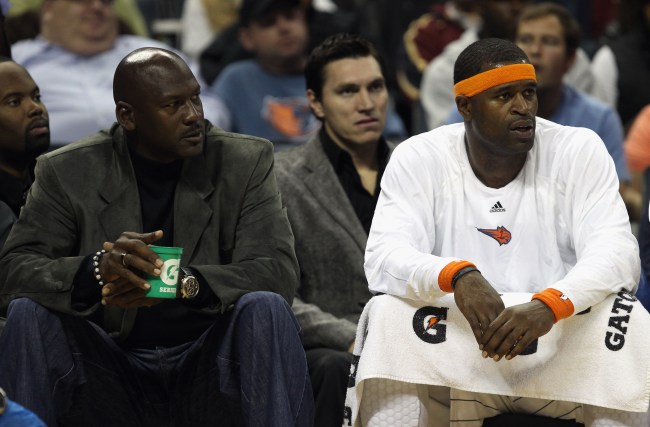 Michael Jordan’s insane competitive spirit was well documented in ESPN’s Chicago Bulls documentary “The Last Dance” but it seems that MJ’s ruthlessness on the basketball court didn’t end with his career as a player.

According to former NBA player Eduardo Najera, a 51-year-old MJ once destroyed a trash-talking Stephen Jackson during an intense Charlotte Bobcats practice session.

Via Inside Buzz by Mikey Domagala

“We were going through a rough patch. Michael decided to jump in and [bring Charles Oakley] on his team. Stephen Jackson, being Stephen Jackson, started talking trash. Jackson said ‘that was the past, this is now and I will bust your ass.’ Michael got furious, trash-talking and killing him and all of us. [MJ is] 50 or 51. Telling Stephen Jackson ‘how does the leather taste in your mouth’ after every shot. Then it became a 1-on-1. It did not end up well for Stephen Jackson. Michael won. It was incredible. It was good for the team, we snapped out of the losing streak we had,” Najera told ‘Inside Buzz With Mikey Domagala’.

It seems like Stephen Jackson should’ve known better than to poke the bear. But hey, that’s just what trash-talkers do. Still, Najera acknowledged that even though Jordan was a bit of a bully, he eventually learned how to stay back and let players do their own thing:

Najera admitted that it was tough to play for Jordan because MJ set the bar so high for his players. Thankfully, it appears that Jordan has taken a less hands-on approach in recent years according to Najera.

LINK for exclusive MJ story about destroying Stephen Jackson 1-on-1 at 51: https://t.co/86dan8zOk0@NBABuzzMikey pic.twitter.com/Tlt199Nvnv