Michael Jordan Is Still The GOAT Of Trash Talk, Even When Golfing With A PGA Tour Pro 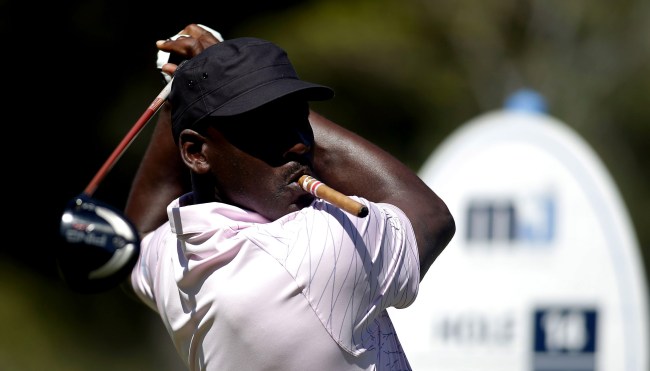 Michael Jordan may be 17 years removed from being the GOAT of the NBA, but as he proved when announcing his new NASCAR team with Bubba Wallace as the driver he’s still got that same legendary competitive fire, saying about the new venture, “I just want to continually win.”

Yet another example of the now 57-year-old Jordan’s mindset when it comes to be the best at whatever he does comes to us in the form of a new story told to Golfweek by PGA Tour pro Dominic Bozzelli.

Bozzelli and Jordan often find themselves playing golf at the same club, Medalist in Florida. In fact, by his estimation, Bozzelli has played around 100 rounds of golf with the GOAT.

So he knows firsthand that the MJ we all saw in The Last Dance is still pretty much the one that exists today.

“Just like you saw in the documentary, he has ways where he’s trying to make you better,” said Bozzelli.

“He’ll start jabbing at me early,” Bozzelli continued. “If I hit a bad drive he’ll say something like, ‘That’s why you’re not playing the major this week.’ Or stuff like that. He keeps ribbing me. You either sink or swim there; he makes you do something about it, makes you dig your heels in. If that’s going to rattle you then you shouldn’t be playing pro sports anyway, but that’s just his way of telling you how to go after your weaknesses. You’re either going to keep hearing it from him or you do something about it. It’s fun.”

Another example of what it’s like to play golf with His Airness was shared by Bozzelli when discussing what happened right after the two were introduced.

Bozzelli added that despite being a PGA Tour pro, MJ probably plays more golf than he does, and it’s never just 18 holes, it’s always 36.

“It feels like you’re going to work when you play with him,” said Bozzelli.