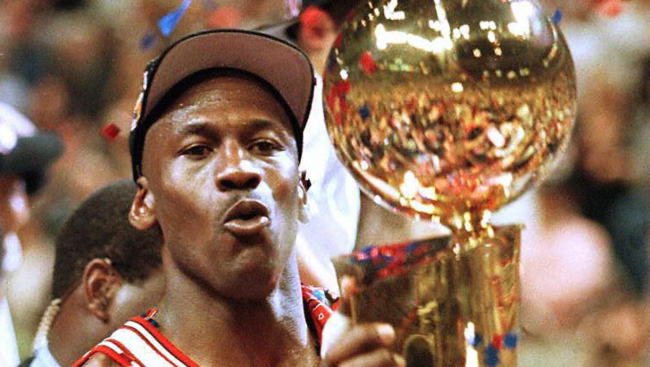 If any NBA fans out there are still debating who the GOAT really is, all they have to do is take a look at the Zoom background Michael Jordan used recently during an interview.

And his Zoom background is just here to remind everyone of that fact.

Honestly, I am not even sure what Jordan was talking about in this clip. Maybe he was talking about about his opinion on the COVID vaccine and the NBA’s rules regarding players needing to be vaccinated. As he stated on Monday, he has no problem being “a firm believer in science.”

“I am in total unison with the league,” Jordan said on TODAY on Monday. “And I think everybody’s been speaking about the vaccinations, and you know, I’m a firm believer in science,” Jordan said. “I’m gonna stick with that, and hopefully everybody abides by whatever the league sets as rules. I think once everybody buys in we’re gonna be fine.”

Whatever it is His Airness was discussing remotely with all his NBA bling in the background, fans absolutely loved the flex. Well, everyone except the LeBron GOAT truthers.

This man is fully invested in his legacy. Love to see it.

We see people in Hollywood and musicians flex their awards all the time. MJ just reminding people what a real winner looks like.

🤣I mean if you got'em flex'em right?🤣Biggest flex ever. You think Brady has something similar on his zoom calls?🤣

OMG a Zoom background that’s the GOAT as well.