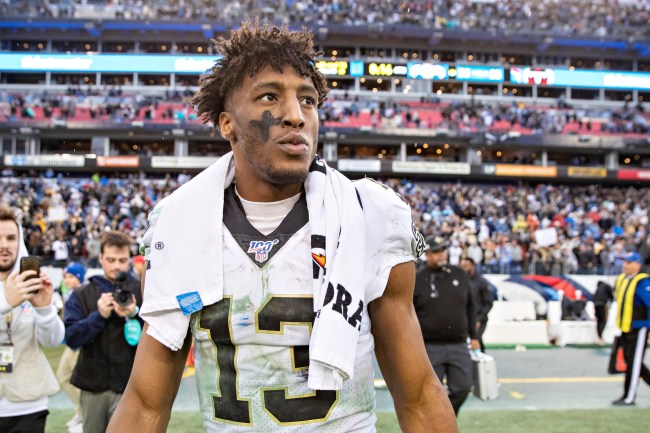 The New Orleans Saints have a dynamic playmaker at wide receiver in Michael Thomas, with the three-time Pro Bowler coming off a 2019 season where he won the league’s “Offensive Player of the Year Award” after hauling in 149 catches for 1,725 yards. That’s awesome and all, but, unfortunately, the wideout seems distant from the franchise this year, with the 27-year-old battling injuries and rumors of insubordination towards teammates and even some coaches.

After Thomas denied blowing up at coaches following his suspension for punching a teammate in practice, it’s clear he and the team just aren’t on the same page, and his reputation seems to be taking a hit. Whether that’s from internal reports leaking out or something else, there’s now more drama to the situation: Rumors that Michael Thomas wants out of New Orleans prior to the NFL Trade Deadline on November 3.

According to Mike Florio of Pro Football Talk, the star wideout’s inner circle has reportedly tried nudging teams to make an offer to the Saints to acquire him. However, as of now, there haven’t been any official offers.

Whether the Saints are or aren’t interested in hearing what someone may be willing to offer before next Tuesday, November 3, this much is true: The Thomas camp has tried to get another team to make the Saints an offer for the man who set the single-season receiving record in 2019.

No offer has been made to the Saints, and at this point the belief is that no offer will be made.

It’s unclear what it would take to get Thomas. Although the move would result in the Saints absorbing a $20 million cap charge, there’s surely a package of players and picks that would get them to consider it.

There’s been a disconnect all season long between the Saints and Michael Thomas, and this report from Florio only highlights that even further. While the dude’s a superstar, his latest actions may lead teams to think long and hard about what it might take to acquire him. After all, this is the same guy who clashed with quarterback Drew Brees over the summer following Brees’ ignorant comments about kneeling during the national anthem. While Thomas’ reaction can be justified, it still shows his willingness to potentially disrupt chemistry in a locker room.

It’s hard to imagine the Saints moving Thomas — especially before the NFL Trade Deadline — but it sounds as if it’s something the wide receiver is interested in. With the Saints sitting at 4-2 and looking to maximize as much out of Brees as they can before he (presumably) retires in the next couple years, it’s wise for the team to keep the most talented wideout in the league and try to mend fences. We’ll have to see how all of this shakes out over the next few days and even into the offseason.