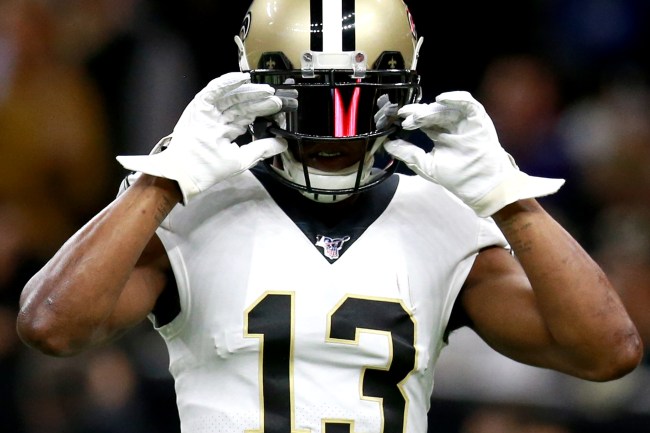 Go ahead and name a better wide receiver in the NFL than Michael Thomas; bet you can’t do it. That’s not a knock on any of the other incredible pass-catchers in the league, but the New Orleans Saints‘ wideout is just built differently, man, with the dude coming off a 2019 season where he caught 149 balls for 1,725 yards to help him earn the NFL’s “Offensive Player of the Year Award.” That’s impressive AF.

As great as Thomas has proven himself to be in the four years since entering the league, he’s shown to have a pretty short temper, too. Hey, that’s nothing new, with a ton of all-time great wideouts being known to have a similar personality — like Randy Moss, Terrell Owens and Chad Ochocinco, to name a few. But, to my knowledge, none of those guys got into an argument big enough to actually fight them, which Thomas reportedly did over the weekend, with details coming out that he punched Chauncey Gardner-Johnson in practice.

The scuffle between Thomas and Gardner-Johnson was bad enough to cost the All-Pro receiver a game check, with the Saints suspending him for the Monday Night Football game against the Chargers.

#Saints star WR Michael Thomas punched teammate Chauncey Gardner-Johnson during a fight in practice, per sources. That’s why Thomas was ruled out for Monday’s game against the #Chargers for what the club is calling team discipline.

While Michael Thomas did fight with Chauncey Gardner-Johnson, new details have emerged about why he missed the MNF game versus Los Angeles: Because the wide receiver apparently clashed with coaches, including head coach Sean Payton following the incident.

That’s according to The Athletic‘s Jeff Duncan, who first reported the news, and provided a few details about the entire incident from over the weekend, per B/R Gridiron’s Twitter and The Score.

The receiver, who missed Monday’s game, reportedly talked back to coaches, including head coach Sean Payton, after getting into a fight with teammate C.J. Gardner-Johnson during Saturday’s practice.

The 27-year-old also yelled at team trainers for not taping his ankle properly, and he accused one staff member of illegally going through his mail, Duncan adds.

Luckily for New Orleans, Michael Thomas’ absence didn’t end up costing them a victory against the Chargers, as the team was able to squeak out a win in overtime to move to 3-2 and keep pace in the way-too-early NFC playoff picture. Had the Saints dropped that game without their superstar playmaker, things could’ve gotten worse before they got better.

Thomas is one of the best all-around players in the league and a bona fide generational talent. But the 27-year-old needs to wise up and get it together if he wants to be known more for his plays on the field than his primadonna personality and short temper off of it. Everyone knows clashing with any coach is a no-no, but doing so with somebody like Sean Payton (and the pedigree he has) isn’t something that Thomas should make routine.