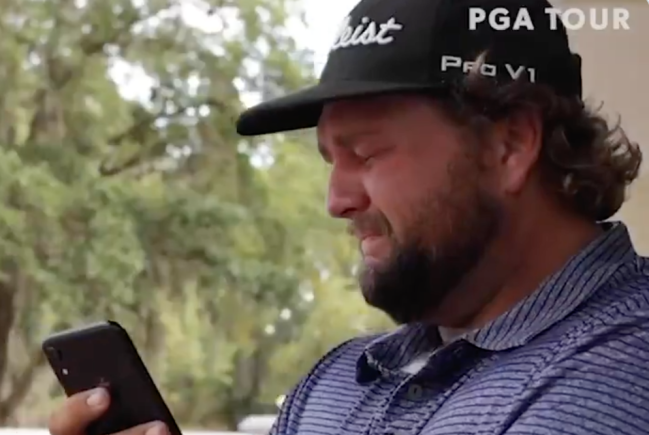 The number of professional golfers out there grinding week after week to hopefully catch their big break is mindblowing. Whether it be on mini-tours all across the country, completely random state events, or chasing PGA Tour Monday qualifiers – all while paying their own way – hundreds and hundreds of golfers are following their dream day after day.

Michael Visacki is the perfect example of one of those players still fighting for his shot, which is exactly why he was overcome with emotion the second it became a reality that he had qualified for the Valspar Championship, which will be his first PGA Tour start since turning pro in 2013.

To put into perspective just how hard it is to Monday qualify for a PGA Tour event, Visacki carded a five-under 67 and didn’t automatically punch his ticket into this week’s Valspar. His 67 only got him into a four-man playoff with two spots up for grabs, where he drained a 20-foot putt to secure his spot in this week’s field.

In the video below you can see Visacki get emotional just seconds after the putt fell, but the real waterworks came when he called his dad to tell him the good news.

Making his dream a reality.

After an emotional Monday Qualifier, @VisackiGolfer now gets his first TOUR start in front of a home crowd. 👏 pic.twitter.com/ihKCJXsUxE

Visacki spoke with Ryan French of the PGA Tour about qualifying for the event and the viral video that ensued afterward.

“They sacrificed everything for me. They have given up everything for me. They knew I was able to do it and they were always there for me. My dad cried, my mom cried, and I cried,” Visacki said. “My mom was driving when she called me, she had to pull over and she had to take a minute. She just cried for a couple minutes. They know I can do it, and to have it finally happen, it just means the world to me and to them. It was just a really special moment.”

The Central Florida alum has had a successful mini-tour career with 37 wins on the West Florida Pro Golf Tour alone and made the cut in his lone Korn Ferry Tour start back in 2018, but he’ll be looking to show the golf world he has what it takes to play on the big tour as well this week.