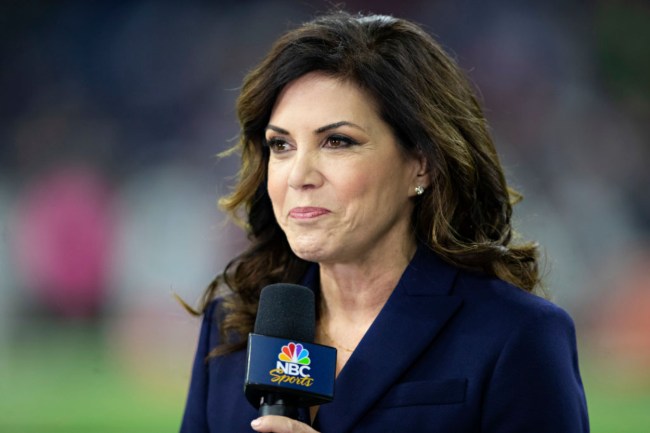 In December it was reported that Michele Tafoya would be retiring from her post as a longtime NFL sideline reporter for NBC. On Tuesday, that report was confirmed, as NBC announced that Tafoya will be handing over her mic at the end of the season.

Her final game as a sideline reporter for the network will come at the Super Bowl on February 13, according to Neil Best of Newsday.

It’s been an interesting NFL season for Tafoya as she’s been absent from the sideline during several NBC Sunday night games. She missed three consecutive Sundays around the Thanksgiving holiday, which the network claimed she was on “bye weeks” and that it gives its announcers time off “repeatedly” in the past.

There are a couple of different theories about why Tafoya missed so much time during the regular season. Some claim she simply took weeks off because the games she missed were cold weather situations, while others believe it has a lot to do with her highly discussed appearance on ‘The View’ back in November.

Tafoya made headlines while discussing the virus, saying “the flu kills people” too. She also made her opinion known about Colin Kaepernick explaining that she doesn’t feel bad for him after all he’s gained away from the game of football nor does she believe he’s been blackballed by the league.

Tafoya Could Seek A Job In News

Following her appearance on ‘The View’ and the report that Tafoya was retiring from sideline reporting, many assumed she may try to get into the news or political world. Based on her statement about stepping away from football, that could be the next step she takes in her career.

“Some may consider me crazy to walk away from one of the more coveted roles in sports television, and I do not doubt that I will miss many aspects of the job. But for some time, I have been considering other areas I would like to explore both personally and professionally,” Tafoya stated.

“I couldn’t ignore that little voice anymore after what we have all endured over the last few years. There’s no better way to walk away from covering the NFL than with one more Super Bowl!”

The 57-year-old Tafoya has been a part of the NBC Sports team since May of 2011.