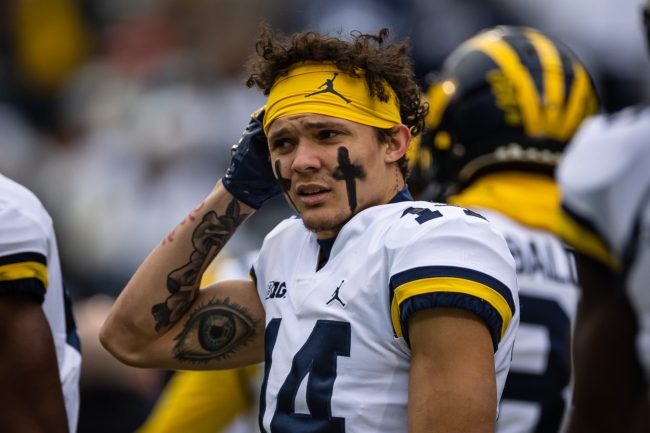 With the College Football Playoff on Friday, Michigan football is getting all swagged out.

Every year, college football teams that participate in a bowl game are presented with various gift bags that are typically provided by the sponsors. The can include anything from Fossil watches, to a Playstation 5, to a 3D-printed action figure.

A full list of what each player gets at each bowl can be found here. In addition to what players get from the game itself, the school hooks them up with a whole new wardrobe for travel, wearing around the hotel, and every event during the week.

This year, Michigan is playing in the College Football Playoff. The Wolverines are headed to the Orange Bowl for a semifinal matchup against the Georgia Bulldogs.

Upon arrival in Miami, they will be rocking all new gear from head to toe.

Late last week, ahead of Christmas day, the team received its swag for the Playoff.

Wide receiver Roman Wilson shared what he got for the game and it’s all fresh. Michigan is partnered with Nike and wears the Jordan Brand, so all of the stuff that it got for the game is straight fuego.

Branded with both the Michigan, and either College Football Playoff logo or Jordan logo, Wilson’s haul includes a duffle bag, a hoodie, hoodie vest, two pairs of sweatpants, six shirts, a set of Orange Bowl slide sandals, two new hats and a fresh pair of Jordans.

Michigan will play Georgia in the night cap on New Year’s Eve. Win or lose, the players will forever have some sweet gear to rock from their appearance in the Playoff. See how it compares to Cincinnati’s swag HERE.