Michigan Football Gets Clowned As Fans Melt Down After Wolverines Miss On Two In-State, Five-Star QBs 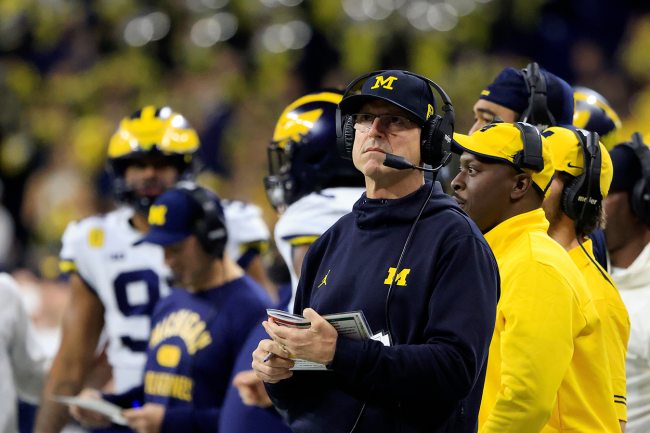 Michigan football went 0-for-2 on five-star, in-state quarterbacks this offseason and the Wolverine fanbase is less than pleased, to say the least. They are losing their minds and completely melting down.

At the beginning of June, former Michigan head coach Lloyd Carr’s grandson C.J. committed to Notre Dame. C.J., a five-star quarterback in the class of 2024, attends high school just 20 minutes down the road from campus in Ann Arbor.

While there is never a “sure thing” in recruiting, Carr playing for his grandfather’s team of 13 years seemed like a no-brainer. He was born and raised in maize and blue, having lived and breathed the program his entire life.

But then he committed to play for the Irish.

Michigan fans blew their lids when Carr chose Notre Dame. However, they were not too mad because they had hope to land a similar target in the upcoming class— Dante Moore.

Moore, a five-star prospect in the Class of 2023, is the fifth-ranked player at his position by On3 Sports, Born and raised in Detroit, there was a belief around Ann Arbor that Moore could end up committing to play for the Wolverines and they were reportedly close.

5-star quarterback Dante Moore, who just committed to Oregon, said Michigan was "very close" to landing him in the end.

But then he committed to Oregon. Moore announced his decision to play for the Ducks on Friday and made history in the process.

Once again, Michigan fans lost it. Head coach Jim Harbaugh and the Wolverines missed out on not only one, but two five-star, in-state quarterbacks.

The Michigan fanbase did not handle it well and other college football fans joined in on the fun, clowning the Wolverines for missing on Moore and Carr.

There was one thing Michigan football *couldn't* do coming off a Big Ten championship, and that was whiff on BOTH Dante Moore and CJ Carr. Big yikes.

Ya Michigan. Way to miss out on Dante Moore and CJ Carr in your backyard. Matt Weiss by all accounts is a terrible recruiter/closer. #GoBlue

Michigan won the Big 10 and made the playoff last year and still failed to get in-state 5 star QBs Dante Moore and CJ Carr.

what an awful look for michigan. cj carr to ND, dante moore committing to Oregon this friday. while we're "selling the experience of being a Michigan Man," clearly inferior schools like MSU are jumping us on the recruiting trail.
2 steps forward, 3 steps back, always.

I can’t believe how many Michigan insiders were selling Dante Moore hope after CJ Carr committed to Notre Dame. Every national analyst said for months that he was going out of state and Michigan was 5th or 6th on his list.

It's not the end of the world, but it certainly hurts that Michigan couldn't land either CJ Carr or Dante Moore. Tough to compete on an elite level when you can't even land the 5-star talent in your own backyard. https://t.co/sIH6x92s6n

Still time to flip. He said Michigan was very close at the end. We will have a good season and will up the ante on cash. Long way from signing day. Don't get too cocky.

Guess Michigan stopped recruiting or “cooled off” on Dante Moore too? Lmao

How does Michigan miss on both Dante Moore and CJ Carr? Lmao https://t.co/n7kcqoMWy4

Michigan whiffed on both in-state stars and now they’re without a quarterback in the Class of 2023 and 2024. Tough scenes.