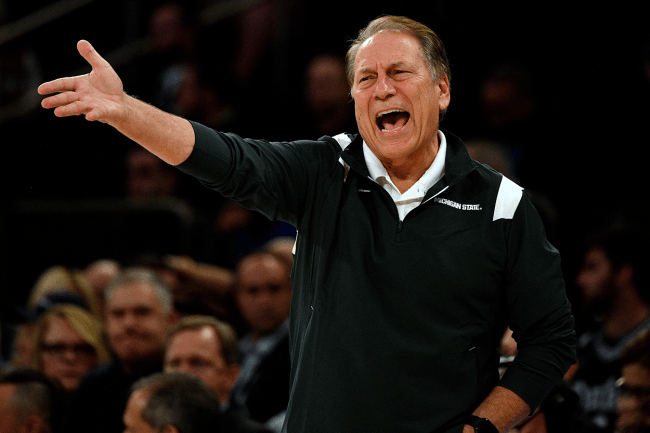 Michigan State basketball is no longer a true blue blood. The team traveled to Indianapolis, Indiana on Wednesday night and *gasp* was forced to drive.

According to head coach Tom Izzo, the athletic administration asked the program to find a bus trip that could cut travel cost. As a result, the Spartans drove three hours and 52 minutes south for their game against the Butler Bulldogs.

Highlight of the night is Tom Izzo saying that Michigan State bussed down the Butler, in part, because the MSU administration asked the program to find a bus trip on the schedule this year to help save some funds.

This was said, it seemed, without irony.

While this may not seem like a particularly significant trip, it is a game to which Michigan State basketball would typically fly. The same could be said for Kansas, Kentucky, etc.

The Spartans took a bus this time. No big deal. Right?

Well, the timing of Izzo’s admission is rather interesting.

On the same day that the 26-year head coach shared that the school asked his program to save some funds, the Detroit Free Press reported that head football coach Mel Tucker is about to get PAID. During just his second year with Michigan State, Tucker is about to receive a $95 million offer.

Again, that $95 million extension was reported on the same day that Izzo said his team had to bus to Butler so that it could “save some funds.” Ironic, no?

Michigan State athletics is self-sustaining and reported $140 million in total revenue and $135 million in total expenses during the 2018-19 fiscal year. The department took a hit due to COVID-19 last year, but is projecting to be back at a normal operating budget this year.

In total, the football program turns a profit of about $80 million for the department. Meanwhile, men’s basketball, profits about $10 million.

There is no denying that the football team, like it is at every D-I school in the nation, is the cash cow. Men’s basketball is typically a distant second.

Tucker’s contract is not coming entirely out of the athletic budget, I get that. Boosters are heavily involved in the price tag.

But for Izzo to say that they need to save money while the head football coach is getting PAID, seems contradictory. Surely there must be basketball boosters who would be willing to pick up the tab for a jet to Indianapolis.

Bussing to Michigan is one thing. Other than that, the Michigan State Spartans basketball program should be on a plane.

Until this transportation deficit is fixed, they can no longer be considered a blue blood. I don’t make the rules.