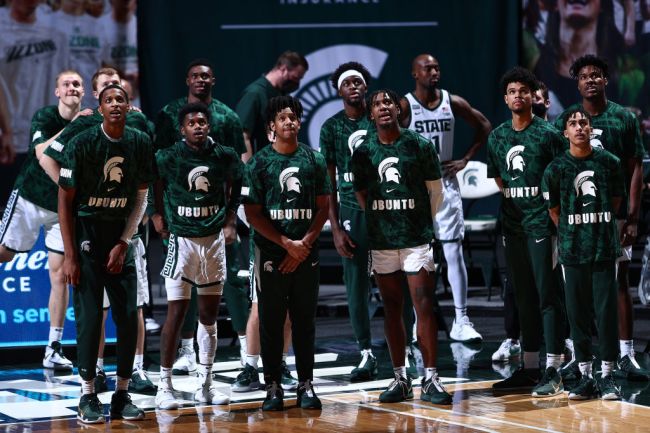 There isn’t enough money in college sports to pay the players, but now, at Michigan State, THOSE PLAYERS ARE SPONSORED. The university announced on Thursday that it had expanded its partnership with Rocket Mortgage to give the company “unparalleled visibility and branding throughout a variety of Spartan athletic teams including men’s and women’s basketball, football and hockey.”

Included in that “unprecedented visibility” is a truly unbelievable and unprecedented move. Beginning with the 2021-22 season, the men’s basketball program will have a new name. Much like a bowl game in football, the team itself will be presented by the sponsor. Seriously. Here is what the announcement said:

Under the new five-year deal, Detroit-based Rocket Mortgage will be the presenting sponsor of the famed men’s basketball team which will now be known throughout the Breslin Center as, “MSU Spartans Presented by Rocket Mortgage.”

According to the athletic department’s 2019 Equity in Sports report, the men’s basketball team brought a whopping $23,808,250 in revenue during that calendar year. That number is surely going to skyrocket (pun intended) when the sponsorship goes into place— if not from a financial standpoint, then from a facility upgrade and behind-the-scenes standpoint.

Meanwhile, the players that will suit up for the MSU Spartans Presented by Rocket Mortgage won’t see a dime of the money. THEY are the product that is being sold, but there will be no royalties on what they are producing. It’s getting ridiculous.

I’ve long been of the understanding that athletes are paid in education, scholarships, meals, gear, etc. I see that argument, and I don’t fight it. If they’re good enough, they’re getting paid under the table anyway. I don’t think there is a feasible way to value a star one-and-done point guard in comparison to the second-string shortstop on the softball team. I wish there was, and I believe whole-heartedly that athletes should own their own Name, Image and Likeness— but that’s a conversation we can have another time.

The moral of this story is that we have to acknowledge how ludicrous it is to trap student-athletes in the twisted, corrupt web of amateurism, only to turn around and sell their team to Rocket Mortgage. The problem is rooted in the NCAA, but its branches extend to the universities that the governing body oversees. It’s simply absurd to tell the student-athletes that there isn’t enough money and then do this.

At what point should we just call them the Rocket Mortgage Spartans? Is that the next step?