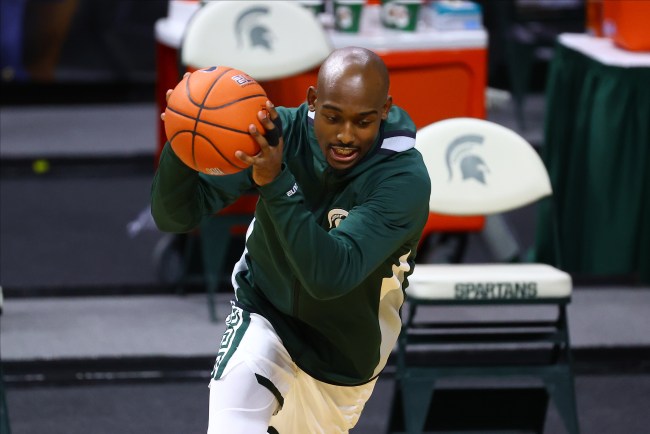 College basketball had a difficult first day with a large number of COVID-19 outbreaks forcing postponements, but it didn’t stop the season from beginning and providing feel-good stories right out of the gate. Michigan State began its year with Eastern Michigan and cruised to an 83-67 victory in the second half.

The real storyline, however, came in the middle of the first. Sparty guard Joshua Langford pulled up from beyond the arc and hit his first bucket in nearly two years.

“Oh man, it’s a lot of emotions but I think the first thing is that I’m very, very grateful just to have the opportunity to play this game that I’ve been gifted with by God,” Langford said Monday evening in a Zoom call. “Just to be back out there with my teammates, obviously it’s a process that I have to get adjusted to because I haven’t played in such a long time but I’m just thankful that I can get tired again on the cour

The 23-year-old senior had not played a game since December 29, 2018 and finished with 10 points in his return.

It's a bucket nearly two years in the making for the @MSU_Basketball senior in his return from injury: pic.twitter.com/2bdpx6GqsU

Langford was a top-20 national recruit, shot 42 percent from three-point range in his career, formed one of the best back courts in the nation alongside Cassius Winston, and was averaging 15 points a game in 2018-19 before a foot injury temporarily derailed him. He missed the remainder of that year and was reportedly looking good in the preseason until he was forced to have surgery on his foot again and shut down for the entire 2019-20.

At that point, as anyone would, Langford was considering giving up the sport entirely. It was taking a toll on him mentally, but he pushed through and never stopped working to rehab and return to form. He earned back his spot in Tom Izzo’s lineup and cracked the starting-five in Wednesday’s season-opener. His 10 points was one of four players to reach double digits for Michigan State and Langford added a pair of offensive rebounds and an assist.

For the Spartans to have any opportunity to make the Final Four this year, Langford’s 6-foot-5, 200-pound frame and sharp-shooting to be a major contributor. College basketball is going to be hard to navigate this season with coronavirus inevitably hitting small rosters (in comparison to a 53+ man football team), but it might provide an opportunity for feel-good stories to lead the headlines this season. Michigan State’s resilient guard is one of them.