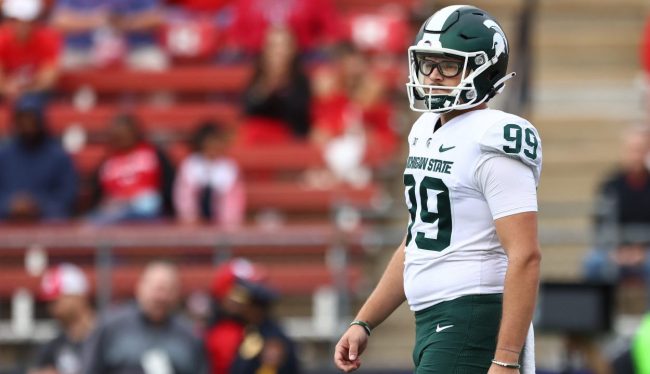 Michigan State punter Bryce Baringer will go down in college football history as a true legend of his craft. Not only is he really, really good at what he does, but he has an iconic look.

Baringer only began punting during December of his junior year of high school. Despite his lack of experience, he earned an opportunity with Illinois and spent his first season with the Fighting Illini before transferring to Sparty.

Over his last two seasons with the Spartans the 6-foot-3, 210-pounder has skyrocketed to the top of the nation’s leaderboard. As a senior in 2021, Baringer earned second-team All-Big Ten accolades and was added to the Ray Guy Award Watch List, given to the nation’s best punter, in October.

He averaged 48.6 yards per punt, which topped the Big Ten and ranked fourth in the FBS. He also finished atop the conference in punts of 50 or more yards.

Needless to say, Baringer has a real leg on him. He also has a great look.

Wearing number 99, Baringer rocks a sweet mustache and glasses. It’s exactly how you want your punter to look, especially at a Big Ten school. 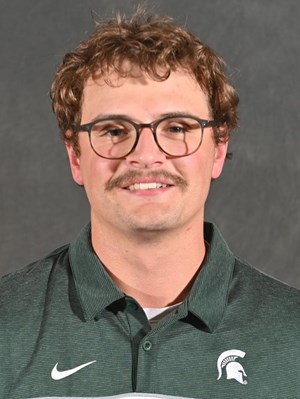 Under his lid, Baringer trades in the glasses for sports goggles, better known as ‘Rec Specs.’ Much like former Georgia kicker Rodrigo Blankenship, the drip is simply unmatched.

Ahead of Thursday’s Peach Bowl, Michigan State released an epic uniform reveal that features its punter and his swagger. Standing at very points around the stadium, Baringer is dressed out in the crispy green kits.

With Ludacris’ verse in Jermaine Dupri’s ‘Welcome To Atlanta’ playing in the background, Baringer, weraring his specs, flexes on everybody.

For The Brand #GoGreen pic.twitter.com/SQNDeq0kuG

Michigan State faces Pittsburgh at Mercedes Benz Stadium on Thursday night. After Baringer went as hard as he did, it’s nearly impossible to imagine the Spartans losing.