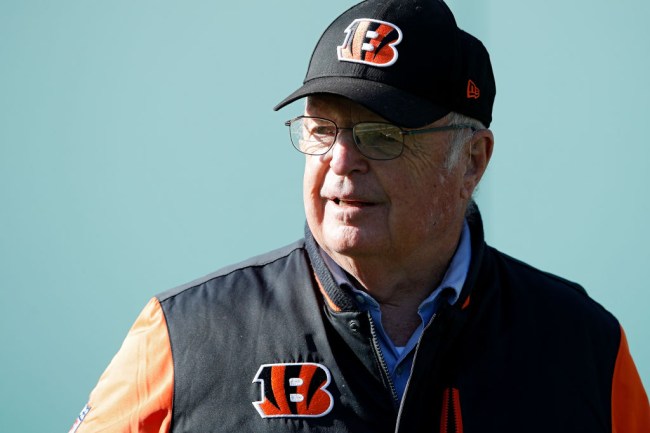 This September will mark the fourth anniversary of the first time Colin Kaepernick kneeled during “The Star-Spangled Banner” to call attention to police brutality (although his protest technically started a week prior when he sat on the bench during the anthem before reassessing his approach after consulting with a Green Beret).

The move sparked a shitstorm that increased in intensity with each passing week as some people accused him of disrespecting the flag and those who fought for it and others saying he was exercising his right to free speech made possible by those who defended it. That season would end up being his last one in the NFL, and while he’s attempted a comeback on multiple occasions, he’s failed to find a home.

Other players in the league would follow Kaepernick’s lead and kneel in solidarity with the quarterback, which didn’t sit particularly well with a number of people—including Cincinnati Bengals owner Mike Brown.

On Monday, a reporter at WLWT posted a lengthy thread of tweets concerning an incident that transpired a few weeks into the 2017 season. After Brown learned several players were planning on kneeling ahead of a game against the Packers, he intervened the day before the contest in an attempt to ward off the potential backlash and multiple members of the team claimed it was all but stated future contracts would be impacted if they ignored his pleas.

1.September 24th, 2017 in Green Bay. Many Bengals players wanted to take a knee prior to playing Green Bay, but not a single player did so. Multiple sources tell me there was an ‘emergency team meeting’ held with one goal, to make sure players did not kneel. A thread.

2.President Donald Trump launched an unforgettable response to NFL players who were kneeling during the national anthem in 2017. Former Bengals safety, George Iloka felt compelled to join the movement in week 3 of the NFL season.

4. Iloka voiced his convictions and multiple players tell me there was an informal, player-run meeting. and as they discussed their viewpoints with each other, it became clear that not all players were seeing eye-to-eye on the controversial issue at hand.

8. Another player, who spoke with me off the record, echoed Iloka’s account of the emergency team meeting when Cincinnati Bengals owner, Mike Brown, made a blunt request.
"He pretty much says, ‘I don't want you guys kneeling.’ He said our fans will crush us."

10. When asked about the decision not to kneel, another player tells @WLWT that if he knelt, he would not expect to get a good contract offer the following year and others had the same sentiment.

12. Instead, The players and coaches decided to link arms in solidarity during the national anthem that day to show unity with each other.

14. If he would have taken a knee that day, @PB_Number2 says he would not have had the opportunity with the Bengals in 2018. pic.twitter.com/SpH0N55M7i

16. I asked the Bengals how they would handle protests in 2020, it seems they are still figuring that out. This is their statement: “We would like to allow time for our players and coaches to discuss before commenting.”

When everything was said and done, those who wanted to protest decided to link arms on the sidelines but weren’t exactly thrilled about being forced to resort to the alternative.

In recent weeks, more and more NFL owners, coaches, and players have voiced their intention to kneel in the fall, and given how the climate has changed, it would be a very bad look for Brown if he decides to go down this path again. However, only time will tell how things ultimately play out.