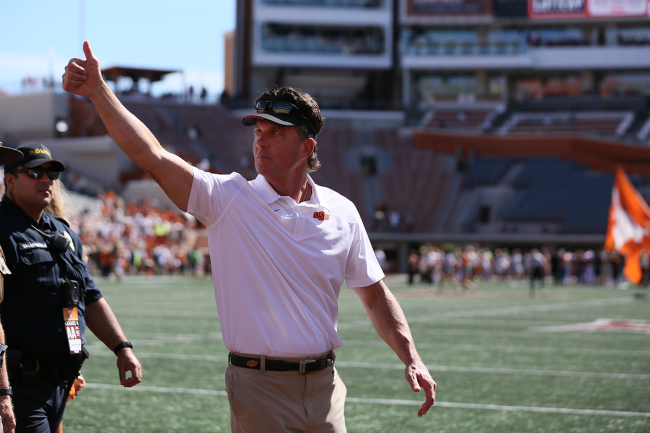 When a reporter asked Oklahoma State head football coach Mike Gundy about his favorite Thanksgiving food, he or she likely didn’t expect anything particularly deep. Gundy was likely to reply with his dish of choice and call it a day.

That was not the case.

In response to the question, Gundy offered not only his meal of choice, but an introspective look at society and how it functions. Specifically, he discussed eating habits and the work culture that we endure as a society.

Gundy began by sharing that he will eat turkey but prefers ham. His main plate-filler, however, is the sides.

“The sides that you get on Thanksgiving, you don’t get any other time during the year, or I don’t,” he said.

Things quickly spiraled into a larger conversation when a reporter followed up by asking why we don’t eat the sides during the rest of the year.

It was at that point that Gundy went full Gundy.

“Well I could get myself in trouble for what I was going to say, so I’m not going to say that,” he said with a smirk.

He then went on to elaborate on the question, and he isn’t wrong.

“The truth of why we don’t do this is because people don’t cook at home anymore,” he said. “None of us do, right? We’re all moving, we work hours, we work late, you’re traveling, people work ’til six or seven o’clock at night, they go by and grab something and go home and try to eat. I don’t want to cook, and then nobody wants to clean up. That’s the worst part, right?”

Gundy proceeded to talk about how much he hates unloading the dishwasher, tying it all back to why he eats mostly sides on Thanksgiving.

Here is his unprompted discussion on societal norms in full:

Mike Gundy is a ham and sides guy pic.twitter.com/NMx1VgIddc

Mike Gundy is ever the wordsmith and, in this instance, he makes a great point. Even though nobody asked.