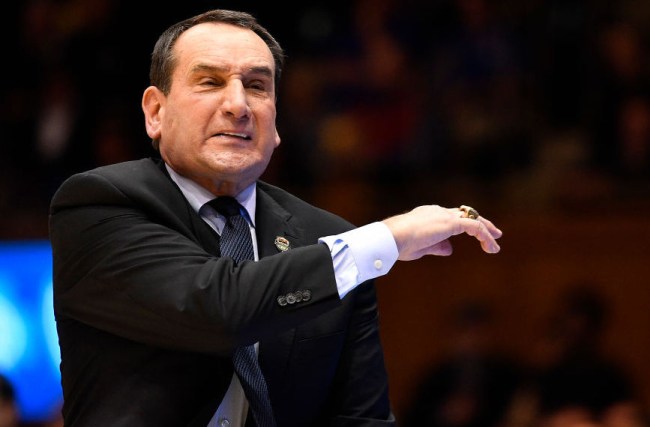 Virtually everyone who grew up watching sports as a kid had aspirations of one day playing for one of their favorite teams, but sadly, the vast majority of us had to eventually come to terms with the reality that we don’t possess even a modicum of the talent required to live out our childhood dreams.

However, that’s not to say there still aren’t ways for the athletically stunted among us to have an impact on the action and there is perhaps nothing that highlights this better than the supporters that comprise the student sections that make college sports so great.

Sure, those fans might not be able to have any influence on the physical aspects of the game but they can play a major role in the mental component by creating a hostile environment for visiting teams and doing everything they can to get into the heads of the opposition.

There is perhaps no group of aspiring scholars who have done a more consistent job playing mind games than the rotating cast of Duke students who make up the Cameron Crazies, who are devoted to their craft to a point where they compile intel on their foes ahead of games and hand out sheets to those in attendance in order to coordinate their taunts and cheers.

Some visitors actually seem to appreciate the effort the Crazies put in to attempt to get under their skin, but on Tuesday night, there was one person who wasn’t super thrilled with their tactics: Mike Krzyzewski, who absolutely lost his shit when the student section started chanting the name of Pittsburgh head coach Jeff Capel, who played for the Blue Devils before spending seven seasons as an assistant coach in Durham.

After Cameron Crazies started yelling "Jeff Capel, sit with us," Coach K could be seen yelling "Shut up" and "He's one of us."

Capel played at Duke and coached there for 7 seasons. pic.twitter.com/OdKeJ62MMv

The “Sit with us” chant has been harnessed in the past by the Crazies to invite recruits and former players to join them in the stands, and after the game, Coach K acknowledged he may have been a bit misguided for reacting how he did.

Here was Coach K’s response when asked about erupting on his own fans just before half. Said he didn’t like Capel being taunted, suggested Duke fans instead turn to chants of “DEFENSE!” or “LET’S GO!” or “COME ON, DUKE!”

Having a normal one pic.twitter.com/P5fsWBHLET

Following the contest, a student in attendance posted a picture of the “dirt sheet” that was handed out prior to tipoff to clarify no harm was meant by the chant and Capel seemed to appreciate the gesture.

Love you guys back!!! No offense taken from me! Keep SHOWING UP AND CHEERING FOR YOUR TEAM! They DESERVE IT! https://t.co/19BC707KjR

I’m glad he was able to be in such high spirits considering the Panthers suffered a 79-67 defeat at the hands of his former team.