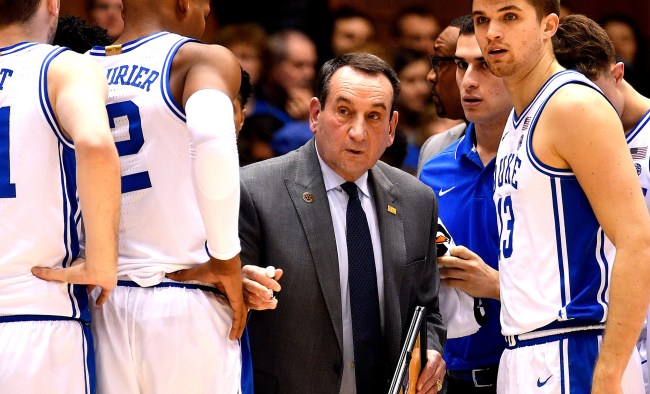 With this year’s global pandemic canceling the 2020 NCAA Tournament (and just about everything else that’s fun), Duke head coach Mike Krzyzewski has a great idea for how to make the 2021 version extra special.

Assuming, of course, that there actually is a 2021 college basketball season.

Fingers crossed, but the way things are going for this year’s college football season, it wouldn’t be a stretch to foresee similar issues for the 347 Division I college basketball teams come late fall.

The Pac 12, for example, has already postponed all of its sports until at least January of 2021.

On Wednesday, it was reported that the Men’s and Women’s Basketball Oversight Committee has proposed a start date for the 2020-21 college basketball season of Nov. 25. That date still needs approval from the NCAA.

Should that happen, and colleges actually get to play a full schedule of games, Coach K thinks it would be a great idea to expand the 2021 NCAA Tournament field.

“My feeling is we should open it up for more. I think with the power conferences and the Big East, there may be more. Let everyone in from those conferences and create enough space to allow other teams to work themselves in from conferences that usually only have one coming in. I personally think we should double the tournament from 64 to 128. All it would do is add one game.

“We have to be careful that if there are too many cancellations. I hope we don’t have any, but the chance of that is slim. These kids are incentivized throughout the season knowing that they can play in the tournament. The tournament and how to get in are key, key factors. We should be creative in our format and when it is played.”

An optimistic Coach K told @MarkPacker why he believes there will be @DukeMBB this season. pic.twitter.com/5tFJfJjxmA

Here’s another idea. Let’s just have a 347 team bracket and start the tournament in February. Just imagine the drama if an 86 seed were to give a number one seed a scare in the first round.