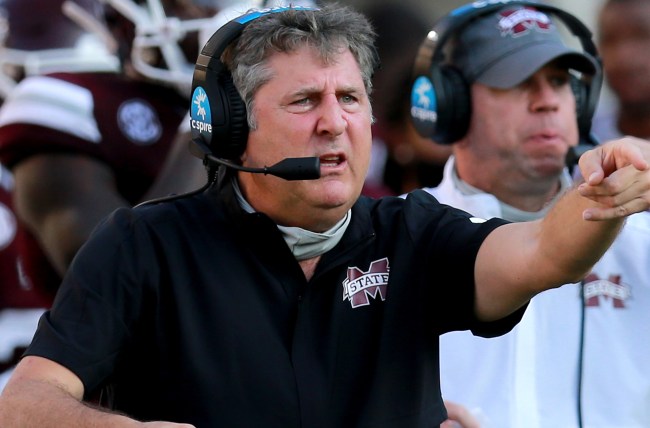 Mike Leach is a one-of-a-kind human being. Leach is a very solid football coach – he is 147-100 in his career – but it’s not what he does on the sideline that’s made him into what he is today, it’s the fact that you never have a clue what the man is going to say.

Leach has always been a big Bigfoot guy, he’s shared his thoughts about the mythical creature for years now. So him crashing Mississippi State’s volleyball practice to talk about Bigfoot should be about as surprising as the sun coming up tomorrow.

No other college football coach in the country could stand around and talk about Bigfoot with a straight face other than Leach. The video is unbelievable, even the staff member standing behind Leach can’t believe the stuff the football coach is saying.

Leach Will Talk To Anyone About Anything

One of the players saying that she has seen Bigfoot at her house really piqued Leach’s interest. There aren’t many words to legitimately describe the video, other than it’s pure gold and 100% authentic, which is what makes Leach so likable.

The video clip is only 55 seconds long, but there’s no telling how long Leach actually stood there talking about Bigfoot. It likely got to the point where things got awkward and players simply started leaving because Leach was just standing there spewing God knows what.

I like to imagine Leach just walking around Mississippi State’s campus when he’s not busy with footballs just sparking up conversations with students. At this point, I’m sure State students don’t even blink when they see Leach walking around chatting it up to literally anyone that will listen.