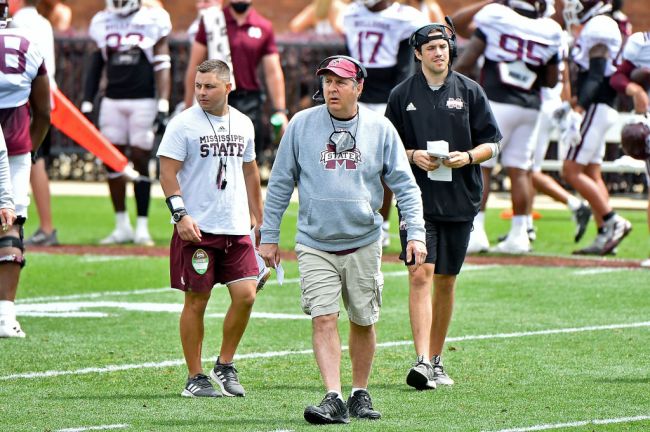 There is nobody like Mike Leach in college football, if not the world. The 60-year-old head coach of Mississippi State is an electric factory every time he gets a microphone in his hands.

In recent years, he’s gone off about college football mascots, halloween costumes, marriage, and cardboard cutouts. After being hired down to Starkville, he rode in a literal bandwagon, called the COVID-marred season ‘joyless,’ and couldn’t have cared less about a brewing culture problem in the program.

Leach was hired to coach the Bulldogs ahead of the 2020 season. Due to COVID-19, SEC Media Days were cancelled in his first season.

Thus, when he got the chance to participate on Tuesday, he made the most of his time at the podium.

When he was asked whether he is vaccinated or not, he chose not to share. Leach has always kept things close to his chest and is doing so again with the COVID shot.

Mike Leach on if he's vaccinated: "If I was or wasn't, I wouldn't share it with you."

Amid the conversation surrounding Name, Image and Likeness— which athletes are allowed to profit from as of July 1— he offered his own, unique thoughts.

Mike Leach proposes a stipulation to NIL and recruiting in which a player would receive a sum of money upon graduation in order to deter players from transferring while still placing a big emphasis on the college education.

He had an equally as different response to the College Football Playoff expansion talk. While most people could see the playoff expanding from four to six or eight, Leach wants chaos.

Mike Leach on expanded playoff: "12 teams is a huge step in right direction. Personally, I would like to see 64 (team playoff)."

Prior to being hired by Mississippi State, Leach was rumored to be in the mix to take over as head coach at Tennessee. Unable to ask him about what happened last year, reporters took that chance this year.

Leach’s response was hilarious and savage.

Mike Leach comments on Tennessee’s interest in him a few years back:

“Yeah, I didn’t end up in the middle of the coup, so lucky for me.” pic.twitter.com/e2afwGfmGB

Mike Leach at the podium. He apparently watches the entire credits of every movie “I’m curious where they filmed it” #SECMediaDays pic.twitter.com/X7mrtv1LzD

Whether you are a Mike Leach fan or not (as an Ole Miss fan, my hatred for Mississippi State runs deep), the man is a national treasure. He never fails to surprise or entertain.

Mike Leach and (WHO?) Mike Jones.
Just because. pic.twitter.com/HYn1LOOby8