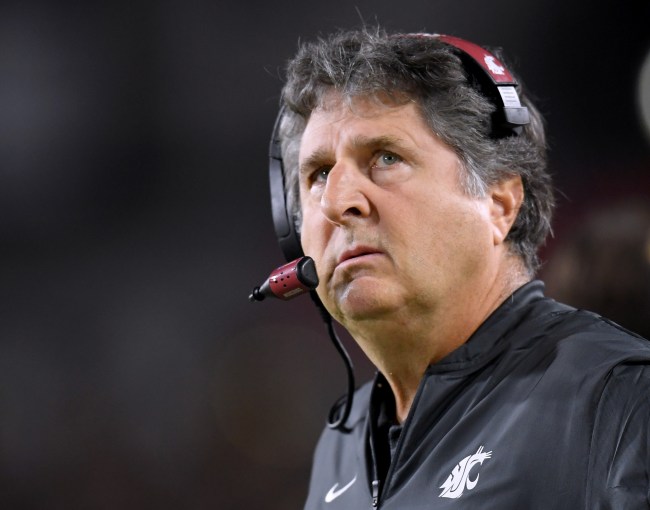 Mike Leach of the Washington State Cougars is the F’in man. I’m not just saying that because I live in Seattle and have a ton of buddies who went to school in Pullman, but because, seriously, the dude is a human soundbite, always offering up ascinine opinions on sh*t that just turn into a stream of consciousness. It’s like he’s always a little bit, uh, “spacier” than normal people.

From Leach’s thoughts on the sport of golf, to taking his sweet ol’ time trying to get his coffee cold to, everyone’s personal favorite, the coach’s rant about getting married, when the guy opens his mouth, everyone needs to hit record on their phone.

Well, Mike Leach was at it again the other day when asked about Halloween — and, in typical Mike Leach fashion, he navigated a strange route to get his point across about how to pull off a successful costume and save the best candy from trick-or-treating for yourself. Basically, it’s classic Leach.

(And yes, the stripper costume quote is on here) pic.twitter.com/fLnx5KoCPB

As the video shows, it starts out with some random-ass thought about a stripper costume, and how Leach is baffled that Halloween stores even need to sell something that resembles a stripper, even going as far as slyly saying, “I didn’t even know you needed a costume to be a stripper.” Oh, Mike Leach, you dirty dog, you.

Naturally, things continue to take a turn for the bizarre from there, with Leach saying that it’s important to have “mobility with your costume” in order to get around to houses as fast as possible to snatch up all the candy.

Guys, whatever Mike Leach drinks everyday, I want some, because he never seems to have a bad day. Seriously, it’s like he’s the real life version of The Dude, and he always just abides with whatever the hell it is that his mind’s telling him to say. I respect this man.