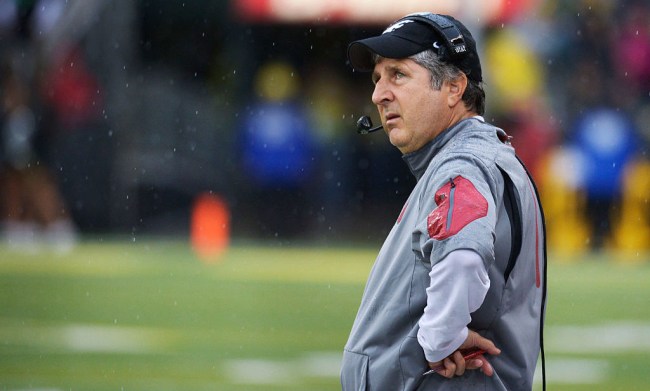 There was once a time when people described golf as “a good walk spoiled”— a time when you couldn’t rent a cart or buy a beer from someone driving one around the course. The sport has evolved a long way since that phrase was first coined, but if you’ve ever contemplated throwing your clubs into the water on the 11th hole while walking the course to make the trip back to the clubhouse a bit less strenuous, then you can probably identify with the sentiment.

I love watching golf, but it’s been a long time since I’ve touched my clubs after I finally came to the realization that I might not have the right temperament for the sport after having to stop myself from breaking the flagstick over my knee every time I missed a five-foot putt more times than I can count. As a result, I commend anyone who can make it through a round without causing an inanimate object any harm.

One person who shares my lack of enthusiasm for playing golf is Washington State football coach and national treasure Mike Leach, who would easily be the most entertaining coach in the NCAA if Jim Harbaugh and his khakis had never left San Francisco. I didn’t know watching someone blow on hot coffee could actually be amusing until I saw Leach do it at a press conference last year, but it’s his rants on things that have nothing to do with football that originally put him on my radar.

Leach has previously discussed the pitfalls of wedding planning, the inherent evilness of candy corn, the long-term dangers of online dating, and the best weapon to have next to your bed to fight off an intruder (a Viking axe. It’s a Viking axe). Now he’s decided to let the world know how he feels about golf, and while this entire video is worth watching, the quote in the tweet it accompanies might sum up the sport better than anyone has before.

Mike Leach, on golf: “Golf’s pretty much for people that don’t swear effectively enough or need practice at it. And so there are people that need golf and I don’t think I do.” pic.twitter.com/ikloxMCXJR