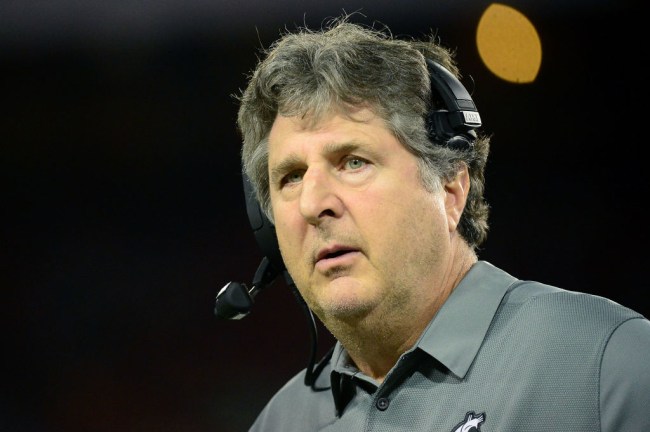 I am of the full belief that Jim Harbaugh is the most entertaining person to ever patrol the sidelines for a list of reasons you can read here, but if there’s anyone capable of giving him a run for his money, it’s Mike Leach. The infinitely amusing Washington State coach has brought an incredible amount of joy into the world thanks to his missives on getting married, the awfulness of candy corn,  the dangers of online dating, and the proper weapon to use to fight off home invaders.

However, he’s also proven he can be an absolute delight without having to say a single word.

On Wednesday, Leach appeared at a press conference alongside Michigan State coach Mark Dantonio as the two fielded questions ahead of tonight’s San Diego County Credit Union Holiday Bowl (which is second only to the Cheribundi Tart Cherry Boca Raton Bowl when it comes to the most ridiculous sponsors of this years’ bowl games).

During the presser, Dantonio took to the podium to field a question about what it’s like to part ways with the seniors on the squad. While the usual protocol would call for Leach to sit with his hands folded and staring into space, the Cougars coach had a far more pressing matter to take care of: the scalding hot cup of coffee in front of him.

Mike Leach cooling off his hot coffee while Mark Dantonio answers a question during the Holiday Bowl press conference is the best Mike Leach moment ever. pic.twitter.com/jN6QyuUhDS

I can’t explain why watching Mike Leach blow into a cup of coffee for thirty seconds is so amusing, but that hasn’t stopped me from watching it five times (and counting). I didn’t really need any more evidence to convince myself Leach is really just a slightly senile grandfather who just so happens to be pretty good at coaching football, but I can’t say I’m sorry I got some.