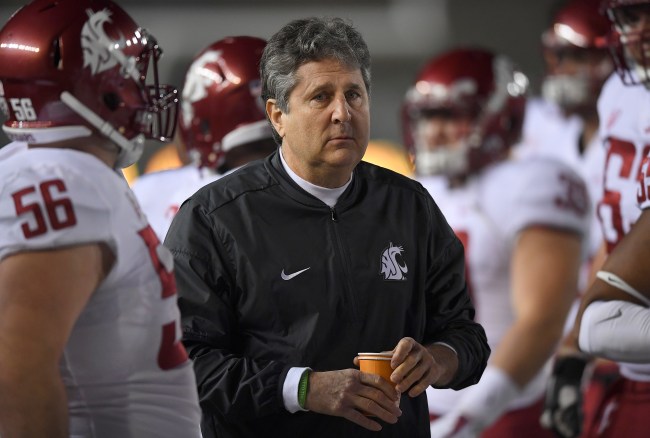 If you were sculpting a Mount Rushmore for hilarious College Football Coaches, Ed Orgeron, Mike Gundy and Mike Leach are going to be three of the four heads. And all of them are on there for their own special reasons. Orgeron because his gravely and impossible to understand voice. Gundy for his candor and complete lack of give-a-shit. Also, his fart noises are a gift to the world. And Leach for his hot takes and opinions. Dude is a human soundbite. And he’s also pretty fantastic at cooling down hot coffee.

This week, Leach was burning on a new topic. The best mascots in college football. For his money, one mascot ranks above all others. Unsurprisingly, it’s not even the mascot to his own team.

What a fresh and fascinating take.

Just like that time a reporter asked him about what to expect when he was getting married.

It’s rivalry week. #WSU is one win away from the @pac12 title game.

But a reporter getting married in 9 days asked @Coach_Leach for wedding advice tonight, and Leach’s answer was incredible. I’m dying. 😂😂😂 pic.twitter.com/alhOiWd9Tv

Dude is a national treasure.