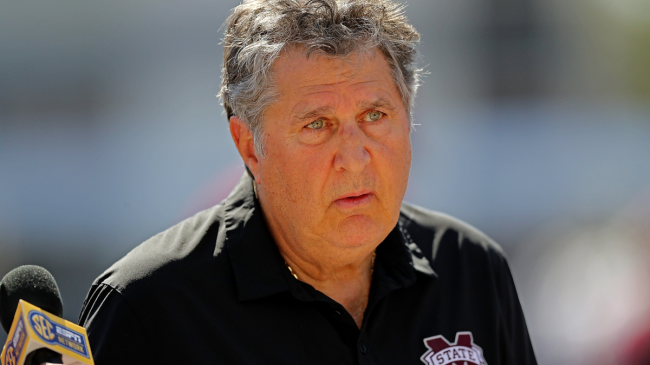 Mike Leach is making headlines once again for bizarre press conference comments. Fresh off of a 30-6 defeat to Alabama, Leach and Co. head into a bye week with the intention of righting the ship.

In that loss, the Bulldogs totaled less than 300 yards off offense, a far cry from what was expected from Leach’s air raid attack. Mississippi State was held scoreless up until the final play of the game, leading to a second straight setback after beginning the year 5-1.

With the off week awaiting, Leach has his mind set on finding that offensive production. Much of that, in his style of play, comes down to the wide receiver position. The air raid is predicated on throwing the ball around the yard, utilizing shotgun sets with four and five pass catchers on any given play.

State’s offense throws the ball around 70% of the time, typically leading to big numbers from his skill positions. Unfortunately, those numbers haven’t been there these last two games.

If his wideouts don’t step up, Leach fears that a dramatic change to overtake future generations in Starkville.

Mike Leach joked that if his pass catchers don’t start using their hands, their kids and grandkids might lose them altogether.

In his latest presser, Mike Leach talked about the non-existence of his wide receivers (and their hands) over the last few games. He jokes that if a change isn’t made soon, there could be life-altering consequences.

“I’m genuinely fearful that if me and the other coaches don’t get [the receivers] right, that about a generation from now, their kids and their grandkids won’t have hands. From a lack of use, the hands could just disappear… We have to correct this. I think that in the end, it’s going to be best for all these guys that they have good hand development, and that they don’t evolve to where they don’t have hands.

“We certainly didn’t use ours [last week vs. Alabama], so there certainly wasn’t any genetic reinforcement on our part that we should maintain our hands. I don’t want guys driving across this country, and they get to Starkville, Mississippi, and all of a sudden there’s these athletic looking, friendly guys that don’t have any hands. And I hope that that’s not the case, but that’s where we’re headed.”

He’s just an interesting dude. I mean, not many folks have a pet raccoon named after a Lord of the Rings character. And while he often says interesting things, he’s far from dumb. The man has a law degree from Pepperdine.

He happens to be a great football coach, as well. For the sake of Mississippians everywhere, hopefully he gets the passing game figured out soon.