Mike Leach Spent Over Two Minutes Of His Weekly Press Conference Talking About Zombies, And It Was Amazing 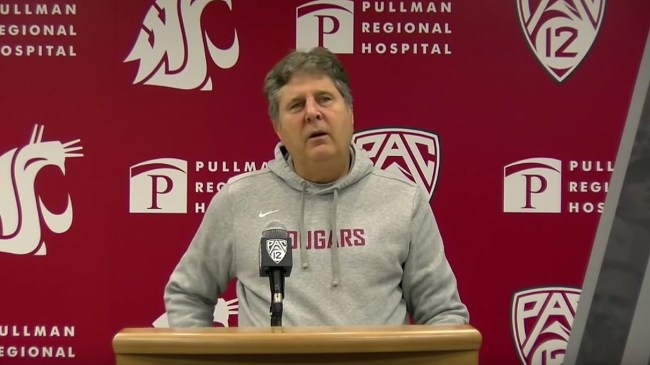 The last time we checked on the coach he was opining about how he was going to invent a veil football coaches can wear on the sidelines to stop the otehr team from being able to read their lips. Seriously.

This week Leach was asked “Did you do anything fun for Halloween?” and he was off to the races. By the way, there is no way the reporter didn’t know what he was starting when he asked Leach this question.

“Uh yeah, I worked. Yeah, I sat up in that room up top there and I watched I watched film, cut up some stuff… you know, I laughed, I cried, you know, it was extremely fulfilling,” Leach responded. “It’s sometimes… exciting, felt dangerous at times, but then you know, just had the time of my life up there.”

Leach then talked about stores starting their holiday sales early and Christmas music when, for some reason, a reporter asked him what he would need to have in the case of a zombie apocalypse (which is coming soon, by the way).

The coach’s answer was pure gold.

“I know this is a minority opinion, and I can say that safely with the success of the shows and movies, but I find zombies to be the most boring of the monsters because everything with zombies is redundant,” Leach replied. “So you basically have dead bodies walking around and get body parts chopped off and continue to walk around to some degree and it’s pretty undefined on what it takes to kill a zombie. You just keep chopping away at them, evidently, and without any particular clue on how they become zombies.

“It’s almost like a disease, so I guess it’s sort of like AIDs for dead bodies, except for they live instead of die or something, I don’t know. But I don’t fully understand the zombie thing. And what I don’t like about zombies is they’re incredibly redundant. Here’s a zombie, alright, we chopped him, now get the other zombie, okay boom, the ash or decayed flesh flies somewhere. So after somebody’s killed three zombies, I mean it’s all the same to me and then you wait there for an hour and a half.

“I honestly think, I don’t think I’d have to store that much. I’d have to store all my favorite things and have a nice, locked-in space. Zombies seem to be able to climb, so I don’t think height is a big deal. And obviously I’d want to blast of couple just to see how that comes together,” he continued. “But I actually think, in a zombie apocalypse, I would die of boredom before anything else. I think some of my neighbors would start shooting zombies – okay there’s another one, and there’s another one, and another zombie, oh okay, this is a really ugly zombie, wow, pretty attractive for a zombie. And then, no, I think I’d die of boredom, I really do.

“I’ve been kind of waiting for the zombie thing to run its course, go back to vampires or something that’s far more captivating. Or something that isn’t quite as science fiction, even like an old Frankenstein or something. Or ghosts, you know, the poltergeist thing? Ghosts are kind of fashionable now and hopefully they’ll overtake the zombies But I’m ready for the zombie thing to be over. And I realize I’m talking to my kids and my son-in-law and all that. They’re zombie-crazed, so they’re obviously part of the problem. But I, for one, am ready to move on from zombies. We need something else and I don’t want it to be a science-fiction deal, either.”