Mike Leach Held His Most Bizarre Press Conference Of The Season This Week, Which Is Really Saying Something 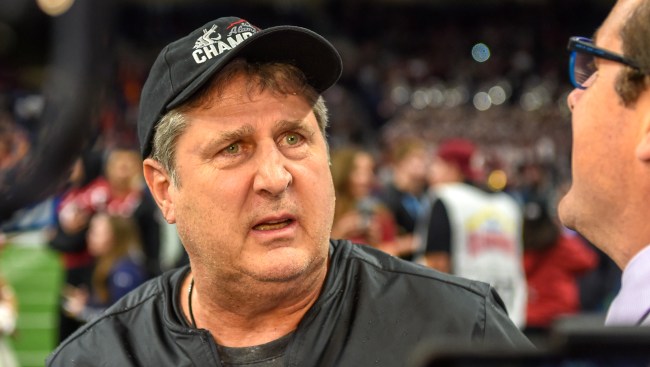 National treasure Mike Leach, the colorful head coach of the Washington State Cougars, was back at it again, cranking out the jokes and hot takes like no other during his weekly press conference.

The topic du jour for Coach Leach this week was football coaches covering their mouths on the sidelines because they’re paranoid that lip readers can tell what what they are saying and what plays they are calling.

Repeatedly throughout the presser, Leach deftly avoided answering actual football questions, because he really thought he had stumbled upon… something.

“I get a kick out of it, but these same people that are covering their mouth all the time, you know, like there’s lip readers because, you know, you know, America has always been this huge bastion of lip readers. You know, starting from kindergarten in some parts of this country, children are raised to read lips,” Leach opined. “So that’s why it’s so necessary for coaches to constantly take their game plan or their script to cover up their mouth, so you can’t read their lips, thereby quickly telling the signal caller on, say, your defense, what you read that their lips said, deciphering it, discovering what play it’s going to be, aligning your defense accordingly, so they can stuff that play, and get after the offense, and do all of that, well, and maybe substitute so it’s even more beneficial to you, and do all of that in 20 seconds. But, you know, that’s the world we live in. Everybody can read lips nowadays, and so they just adjust their defense or their offense around what they see he’s saying.”

Not sure how he went from discussing his preparation for Wazzu’s next game to that, but there he was, and he wasn’t even close to being done.

“You know, what they oughta do is just give these guys mouth covers… I ought to invent this﻿, and we ought to go together on this, since you thought it up. Instead of a Zorro mask that covers your eyes, we’re just going to have one that covers the mouth, you see. And we could sell these to football coaches everywhere. You could have a deal where it kind of attaches on your ears, you know, kind of like eyeglasses, and hangs right here like a veil, not as exotic, we’d make it a little more studly and masculine,” Leach explained.

“And it hangs like a veil because we don’t want them to look like a belly dancer, per se, but it looks like a veil, hangs right here, and so then they don’t have to constantly hold up their script, and then on that rare occasion they forget to hold up their script, ‘Oh my gosh I forgot hold up my script, they know everything we’re gonna do’ and ummm but we’ll just have that veil right there you see. Then you can talk to your heart’s content and then we could literally put these lip readers out of business. But that’s what I think we ought to do.”

You all done there, Coach? No? Okay, carry on…

“Yeah, we need to get on the list. We’ve got, what, two days to get one of those veils,” he continued. “And we could logo ’em up a little bit, you know, even something like favorite cartoon characters. We can even draw a mouth on there. And I’ll tell you this, those that are kinda into fashion, we could have a flesh-colored veil that, you know, has lips and teeth on it, but they just don’t really move, you know? That’s what I say, I think that would be a brilliant idea. Could stick a logo on there, oh yeah, there’d be swosshes, Oregon, they’d have swooshes on theirs. And here, maybe we could get some cool Cougar teeth, you know, a little bit of nose, some whiskers. It’d be great.”

Trust me, someone, somwehere out there in internetland will actually begin creating these to have them ready by Saturday in 3…2…1.