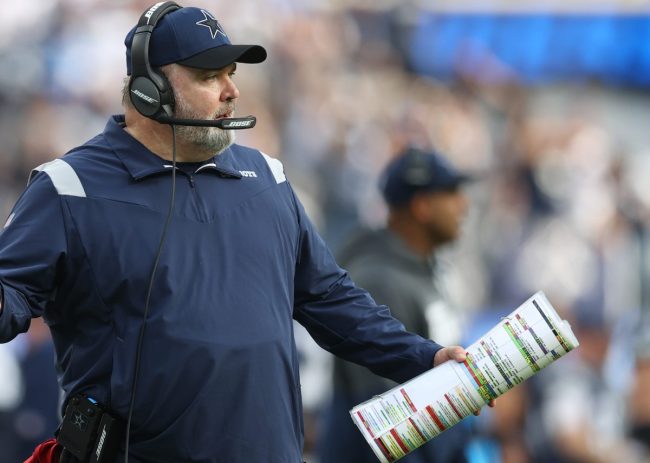 Mike McCarthy made some interesting comments about the Cowboys’ Super Bowl chances ahead of the 2022 season. The head coach took to the media to discuss his team’s outlook as training camp kicks off, albeit in the awful location of Oxnard, CA.

Dallas is 18-15 under McCarthy over the last two seasons, making it to the Wild Card round last year. Despite finishing with the third-best record in the NFC, Dallas was ousted by the 49ers in the first round.

With a new campaign quickly approaching, McCarthy was asked his thoughts about what it takes to get to the Super Bowl. Based on the confusing comments, it sounds like it’s definitely the defense… Er, is it the quarterback?

“At the end of the day, defense wins championships, but the Super Bowl is won by the quarterback. That’s just looking at statistics. I mean, that’s my opinion. That’s how I view the journey.”

Last time we checked, the Super Bowl and an NFL championship were the same thing. And are those comments backed by numbers or are they just his opinion?

McCarthy is an old school guy, having grown up in the Steel Curtain era in Pittsburgh, PA. Watching those Steelers defenses win four championships in the 1970s has surely shaped his football mindset.

But in today’s game, the quarterback is key, and Dallas should have one of the best in Dak Prescott. McCarthy was attempting to compliment his passer, saying that they’ve built the offense around him as they look to take the next step.

It just didn’t come off the right way.

Fans were quick to chime in with some hilarious responses on social media.

Always leave yourself an out

All jokes aside, McCarthy has taken a team to a title, leading the Packers to a Super Bowl championship over his hometown Steelers. But this quote is absolute gold.