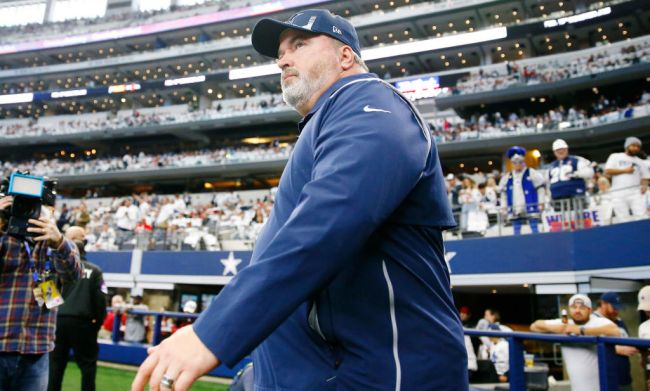 Following the Dallas Cowboys 23-17 loss to the San Francisco 49ers on Sunday afternoon, questions have been raised about the future of head coach Mike McCarthy, especially considering the slopiness that defined Dallas’ performance, as the team racked up 14 penalties.

Despite being one-and-done in the playoffs, Cowboys leadership seems surprisingly committed to McCarthy’s future as the team’s head coach. During an appearance on “The K&C Masterpiece” on 105.3 The Fan, Cowboys Executive Vice President Stephen Jones was asked about McCarthy’s future with the organization and said he’s “absolutely very confident” that McCarthy will remain in the role next year.

It’s certainly looking like the Cowboys are going to be in the market for a new defensive coordinator, though, as Dan Quinn — the former Arizona Cardinals head coach who helped turn the Cowboys’ defensive unit around this year — is shaping up to be one of the hottest head-coaching candidates this offseason. According to reports from ESPN’s Adam Schefter, Quinn has four head coaching interviews lined up this week, as he’s set to speak with the Chicago Bears, Denver Broncos, Miami Dolphins, and Minnesota Vikings.

For all of McCarthy’s faults, he certainly can’t be entirely blamed for the Cowboys’ loss to the 49ers, as most of their stars — Dak Prescott, Ezekiel Elliot, Ceedee Lamb, Amari Cooper, etc. — wildly underperformed in the game.

With their upset win over the Cowboys, the San Francisco 49ers will head up to Green Bay to take on the Packers.