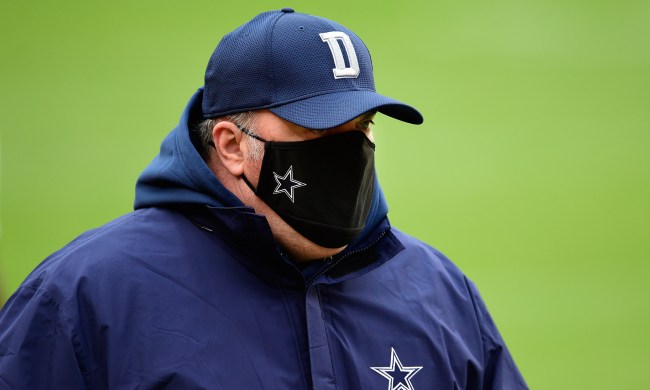 Dallas Cowboys head coach Mike McCarthy has been struggling in his first year running the team to get his players to not suck.

After a abysmal 2-7 start, fans were calling for McCarthy and new defensive coordinator Mike Nolan to fired and there appeared to be some serious issues inside the locker room as well.

So, with a much needed bye week before facing the Minnesota Vikings on Sunday, McCarthy decided to try some, how shall I put it, unconvential coaching and motivational tactics.

Second, and we’re just finding out about this now, McCarthy went HAM with a sledgehammer on some watermelons with a different goal written on it.

Seriously. He did that. He went full Sledge-O-Matic.

According to NFL Network’s Tom Pelissero, “McCarthy pulls out a sledgehammer. Not a prop, a full sledgehammer you can knock a wall down with, and someone rolls in a bunch of watermelons. Each one has a different objective written on it. McCarthy reads the objective, bam! Smashes the watermelon.”

#Cowboys coach Mike McCarthy pulled out a sledgehammer during Saturday night’s team meeting and smashed watermelons like Gallagher to emphasize their objectives. Players roared, then responded with an inspired win in Minnesota. @nflnetwork pic.twitter.com/oiUThTYuYJ

After the game, Jon Machota of The Athletic reported that McCarthy admitted to performing the unusal motivational tactic on Saturday night.

“It’s important to have fun. We were just using the approach, honoring the great comedian Gallagher. The players were into it. We had some fun,” said McCarthy.

He also added, “We had to bring our own watermelons. It’s hard to find watermelons this time of year in Minneapolis.”

It must have worked because the Cowboys picked up their third win over the favored Vikings and now the ‘Boys are in a three-way tie for second place just a half game back of the Philadelphia Eagles in the stellar NFC East (pictured below).