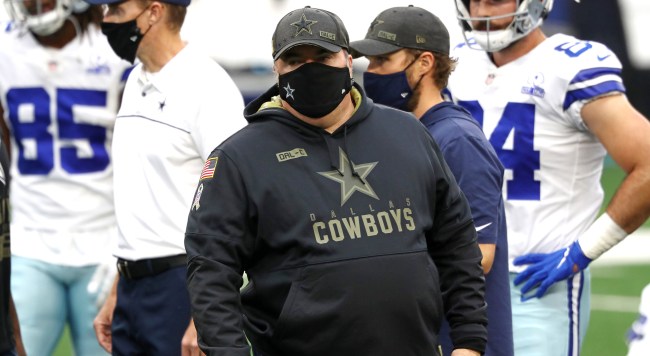 Dallas Cowboys head coach Mike McCarthy appears to be running out of ideas for how he can possibly turn his team’s fortunes around.

Coming off yet another bad loss, losing to the Steelers 24 to 19 despite being up 19 to 9 after three quarters, the Cowboys fell to an abysmal 2-7 on the season and extended their losing streak to four games.

Amazingly, thanks to the NFC East being absolutely terrible, Dallas is still far from being out of the playoff hunt as the Philadelphia Eagles lead the division with a 3-4-1 record.

So, in an effort to shake the team out of its doldrums during the Cowboys’ upcoming bye week, McCarthy says he is going to try something called “across the hall” coaching.

Are you asking, “What is across the hall coaching?” Because I certainly was when I read it.

I have no idea if that’s something professional football teams do on the regular or not, but considering how godawful the Dallas defense has been under new coordinator Mike Nolan and reports that some Cowboys players had zero faith in the coaching staff and claiming they are “totally unprepared,” I guess it can’t hurt.

Maybe the offensive players can offer some advice to Nolan on how to cut down the team’s league worst 32.2 points allowed per game, right, Cowboys fans?

So all the players will hate Nolan after next week?

Offensive players take after a session with the defensive coaches:

"Nowwwww I see why you guys can't stop anyone."

That’ll fix ‘er. I don’t think Nolan has effected this team enough. I need him working with the offense.

... because the players don't look confused enough out there on the field already?

What? The defensive coaches needs to spend 12 hrs per day with defense players so they can learn defense. They still are not sure where to line up.

What is this, high school?

At this point just let the offensive players PLAY on the D side and the Defensive guys play offense? What can it hurt? Other than some DB’s egos, I’m guessing the WR’s can play DB better than anyone else on this roster!