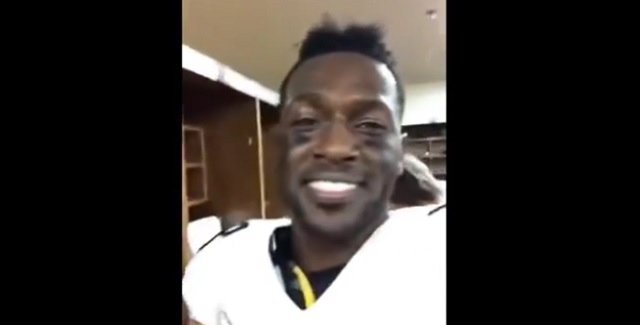 Antonio Brown may have given the Patriots some bulletin board material this week when he brought a camera into the locker room last night.

After beating the Kansas City Chiefs, Brown recorded his coach Mike Tomlin giving a postgame speech in which he calls the Patriots “assholes”.

“When you get to this point in the journey, not a lot needs to be said. Let’s say very little moving forward. Let’s start our preparations. We spotted those assholes a day and a half. They played yesterday. Our game got moved to tonight. We gonna touch down at 4 o’clock in the fucking morning. So be it. We’ll be ready for that ass. But you ain’t gotta tell them we coming. Because some of us might not like the damn [unintelligible]. The chest pounding.

Tomlin went on to advise his to”keep a low profile and to “keep cool on social media”. It turns out that didn’t work out as Brown’s stream attracted over 30k viewers.