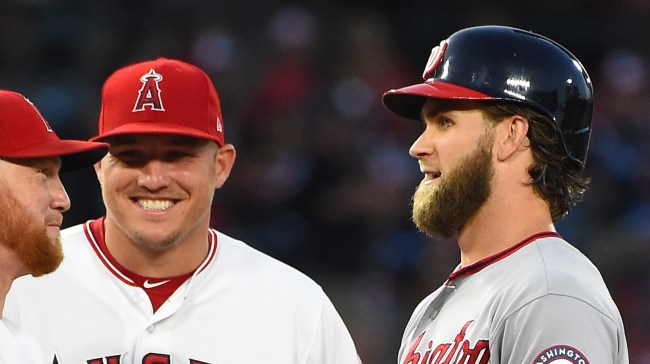 Mike Trout’s record-breaking 12-year, $430 million contract with the Los Angeles Angels has people Twitter tripping over themselves in the rush to make Bryce Harper and Philadelphia Phillies jokes.

Trout’s deal actually is a 10-year contract extension for $362 million, plus the $68 million the Angels already owe him for the next two seasons. Semantics, I know.

In fairness, and without much debate, Trout is definitely the superior player of the two, but sheesh, $10 million more a year than Harper?

Also, so much for all that Bryce Harper collusion talk, huh?

It's not every day you can get a serious collector's item at these prices. #WearTheMoment https://t.co/WgIJLotWCy pic.twitter.com/XY9cwXB7fb

(Also, did MLB The Show know since January that Harper was going to the Phillies? But I digress.)

Anyhoo, because we will never have any idea what making that kind of money is like, and we’re all a bit spiteful about it, Twitter has been in overdrive with Bryce Harper jokes.

This really makes you question Bryce Harper's commitment to Philadelphia, that he wasn't able to get Trout to turn down $430 million.

Live look at Bryce Harper getting the news about Mike Trout. pic.twitter.com/jHGOabEvHT

Bryce Harper: "Congratulations to me for signing the biggest contract in professional spo–"

When Bryce Harper gets that Mike Trout notification pic.twitter.com/haDdsxN2O5

Bryce Harper realizing he has to live Philly for 13 years without any possibility of Mike Trout coming: pic.twitter.com/aCsFhaIqvn

And on and on it goes… because we’re all very petty and jealous.

In other baseball contract-related news…

This is the only evidence that he can actual pitch but apparently it was enough to sign the largest deal in pro-sports history. pic.twitter.com/krteMDtuyd