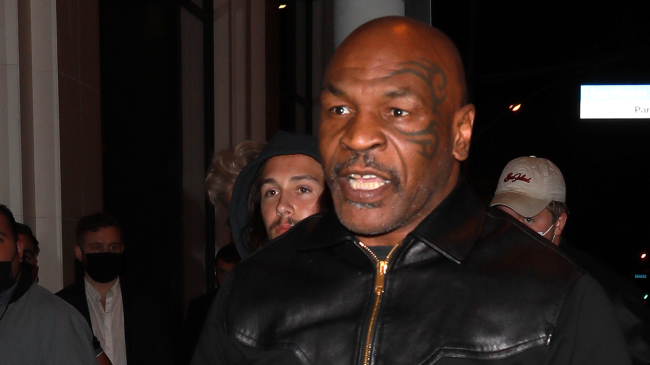 Boxing legend Mike Tyson got into a little altercation on a plane on Wednesday night as he was getting ready to fly out of San Francisco International Airport to Florida.

According to TMZ, Tyson was on board a JetBlue flight at around 10:30 p.m. when another passenger apparently got under his skin.

Video shows the man appearing to continuously talk to Tyson while seated behind him and acting goofy.

The footage then quickly jumps to Iron Mike punching the hell out of the passenger several times, bloodying his face.

A witness on the plane says as he and his friend were boarding Tyson’s flight … the boxing legend was initially cool with them and the other passengers.

The witness tells us Mike took a selfie with him … and then was patient with his overly excited buddy, who kept trying to talk to the 55-year-old fighter as he sat behind him.

Eventually, though, we’re told Tyson had enough of the guy behind him talking in his ear … and told him to chill. When the guy didn’t, that’s when the witness says Tyson started to throw several punches at the man’s face.

Tyson reportedly walked off the plane after the incident. The passenger who got punched reportedly received medical attention and spoke to police about the assault.

Mike had appeared at San Francisco’s 420 cannabis festival in Golden Gate Park earlier in the day to promote his cannabis brand Tyson 2.0 and present the festival’s inaugural community and compassion award.

Law enforcement, JetBlue and Mike Tyson’s representatives have all so far declined to comment on the incident.

The internet had much to say about the video of Tyson punching the passenger.

That guy was poking the bear. Was doing that on purpose for sure.

Mike is extremely chill these days. That guy must have said something real bad to set Mike off this bad.

I feel a type of way. Chris Rock disses a man’s WIFE in front of the NATION and the man gets crucified for clocking him like he deserved. This bs goes down and errybody like, DAMN RITE