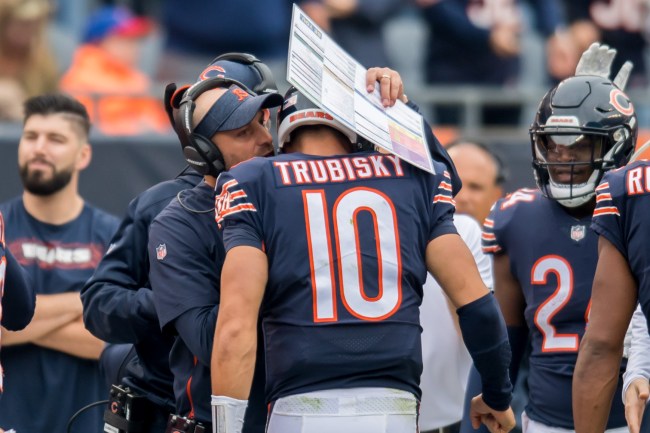 You’d be hard-pressed nowadays to find someone that believes Bears quarterback Mitch Trubisky was worthy of being selected second overall in the 2017 NFL Draft. Even the franchise itself doesn’t seem to be too confident with Trubisky after declining the fifth-year option on his rookie contract, and ESPN’s Mike Wilbon sees that as a problem.

Wilbon, who is a big-time Chicago sports fan, joined The Rich Eisen Show on Wednesday and explained the situation surrounding the Bears and the 25-year-old quarterback. Simply put, Wilbon feels bad for Trubisky and doesn’t think he’s necessarily getting the fairest of shakes.

“I feel bad for Mitch Trubisky. He has a coach [Matt Nagy] that doesn’t want to coach him. Trubisky is being taken down by a coach and GM [Ryan Pace] who won’t back him.”

Trubisky took a step back last season throwing 17 touchdowns and 10 interceptions during an 8-8 campaign after leading Chicago to a 12-4 record the season prior. Not only could Trubisky’s future in the NFL be up in the air with the team not picking up the fifth-year option, but the Bears also brought in Super Bowl winner Nick Foles this offseason which will make things very interesting.

Related: Mitch Trubisky Gets Relentlessly Zinged By A Chicago Restaurant Describing What A Safe Social Distance Is

There also seems to be a rift between Nagy and Trubisky that may hit on a lot of different angles, which was evident when Nagy benched him for one game last season. Whether or not that benching was centered around a possible injury is still up for debate, but Wilbon offered up an honest opinion about the relationship.

“This coach doesn’t want to coach him,” said Wilbon. “I know that from players who were in Kansas City at the time. I’m like the last person defending Mitch.”

The Bears, thanks to Nagy and the situation involving Trubisky, will undoubtedly be one of the more interesting teams to follow if and when the 2020 NFL season gets underway.