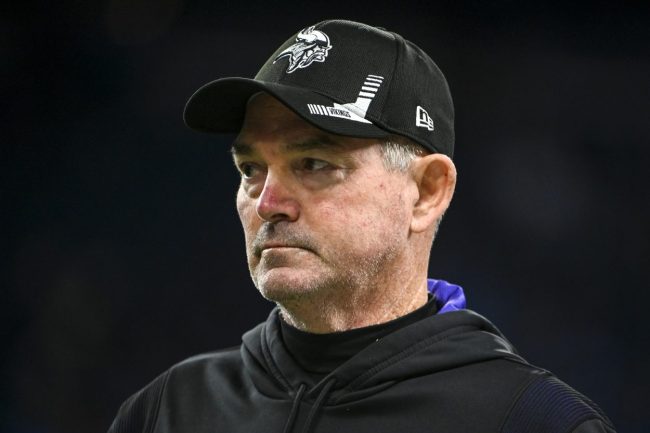 The Vikings have officially been eliminated from NFL playoff contention with their loss to the Packers on Sunday Night Football. Despite his team’s struggles, and the fact that next weekend’s game is meaningless, head coach Mike Zimmer is not interested in getting his rookie quarterback any live reps. At all.

Ahead of Minnesota’s game against Green Bay, quarterback Kirk Cousins was placed on the COVID-19 list and ruled out after testing positive. In his absence, seven-year career backup Sean Mannion was named the starter.

Some people were surprised by the decision, considering that the team drafted a quarterback in April. During the third round of the 2021 NFL Draft, the Vikings selected Kellen Mond out of A&M.

Minnesota did not have much to lose against Green Bay, so starting Mond was something that might have made sense. And yet, Mannion got the nod.

During the loss, Mannion completed 22 passes for 189 yards and one touchdown. He was also the team’s leading rusher with two carries for 14 yards.

Mond did receive one series in the fourth quarter and did this on third down:

Needless to say, it was not an impressive performance from him nor the Vikings offense and they lost by 27.

As a result, next weekend’s game against Chicago determines only this year’s draft order. There are no implications and it is virtually an exhibition game.

Cousins, who was out on Sunday, could be cleared by next weekend, but playing him does not make any sense at risk of injury. In turn, it could be an opportunity to get Mond some time.

After Sunday Night Football, he was asked if he wants to see Mond next week. In response, Zimmer put his rookie quarterback in a body bag.

“Not particularly,” he said. When asked why, Zimmer did not mince words.

Now, to be fair, Mond was bad in college. Drafting him in the third round made no sense. Clearly he is not any better on the NFL level because Zimmer has no desire to put him on the field.