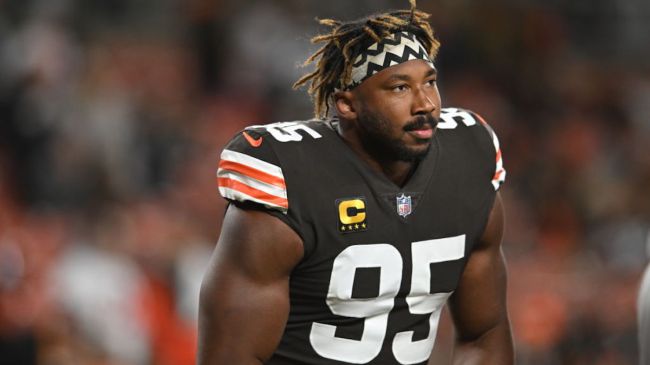 Earlier this week, the NFL collectively held its breath as news came in that Cleveland Browns pass rusher Myles Garrett had been involved in a one-car accident that sent him and a passenger to the hospital.

Luckily, while no life-threatening injuries were sustained, Garrett suffered a shoulder sprain, biceps strain, minor lacerations, and bumps and bruises in the crash, according to the Cleveland Browns.

At the time, it was reported by NFL Network insider Tom Pelissero that Garrett, 26, “swerved to avoid an animal on a wet road and overcorrected,” resulting in the car flipping multiple times.

However, new reports now indicate that the Ohio State Highway Patrol issued the NFL star a citation for “failure to control his motor vehicle” as he was traveling at an “unsafe speed (65 mph in a 45 mph zone) for the type of roadway” he was on.

Miles Garrett was issued a citation for “failure to control his motor vehicle”, was reportedly driving 65 mph in a 45 mph zone

According to the highway patrol, Garrett crashed his 2021 Porsche near Wadsworth, Ohio, striking a ditch after leaving the road. His car then hit a fire hydrant before overturning several times. A female passenger who was in the vehicle also was taken to the hospital with what were described as minor injuries. [via ESPN]

Despite the crash, the Browns are expecting Garrett at the team’s facility on Thursday. A three-time Pro Bowler with Cleveland, Garrett has racked up 65 career sacks since the Browns took him with the #1 overall pick in the 2017 NFL Draft.

As pointed out in a report from WKYC, Garrett has “at least” six speeding tickets in the Cleveland area since he arrived in the city back in 2017. Furthermore,  multiple citations show that Garrett was driving over 100 mph.

At this time, Garrett’s status for the Browns game against the Atlanta Falcons is still “to be determined.” The Browns are currently 2-1 following wins over the Pittsburgh Steelers and Carolina Panthers and would be 3-0 if not for a historic collapse against the New York Giants back in Week 2.

RELATED: All Of The Craziest Stats From The Browns’ Historic Collapse Against The Jets