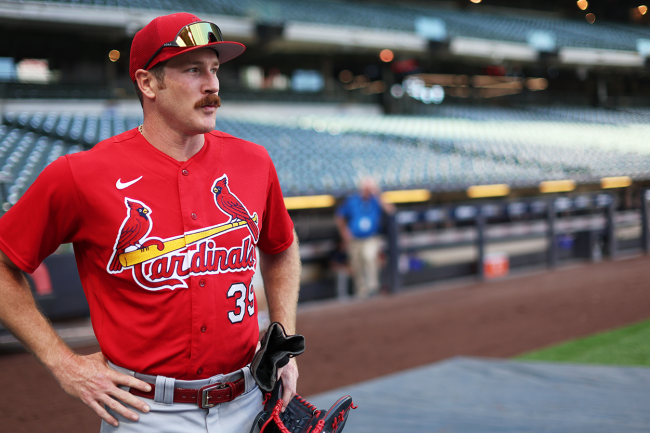 The Saint Louis Cardinals had lost eight of 10 games leading up to Sunday’s matinee against the Philadelphia Phillies. Miles Mikolas wanted to shake things up and try to turn things around, so he took it upon himself to try and spark some change— literally.

To do so, the man known by many as ‘Lizard King’ took a walk around the entire field at Busch Stadium and burned sage.

People often burn sage and other holy herbs to cleanse a space of negative energy and to promote healing. That’s exactly what Mikolas was trying to do.

He spoke with reporters prior to the game on Sunday. Rocking his incredible mustache, a gold chain and some flashy shades, he explained his thought process.

“Just trying to get some good energy in here,” he said. “A little cleansing, little bit of a new beginning for us today. It’s Sunday, it’s the start of a new week.”

Here is his full conversation, which is incredibly entertaining. To close things out, Mikolas explained “it can’t hurt” with a shrug.

Miles Mikolas on walking the whole Busch Stadium outfield with sage earlier today: "I dabble in some holistic medicine healing. Sage is one of those things that's the three sacred herbs, and it can't hurt."#STLCards pic.twitter.com/Dfm7qaWdLf

Mikolas, who is in the middle of a career year in his fourth season with Saint Louis, is known for his antics. He is not only dominant on the mound, but he is often engaging in some shenanigans— which once earned him the nickname ‘Lizard King’ after eating a live lizard while in San Diego.

Friendly reminder that this is how Cardinals pitcher Miles Mikolas earned the nickname Lizard King pic.twitter.com/uaT26In8dt

Only time will tell whether the sage helps turn around the Cardinals’ recent stretch of struggles, but as Mikolas said — it can’t hurt!