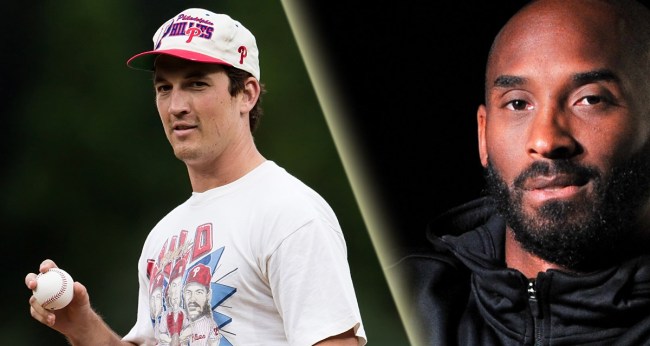 Top Gun: Maverick star Miles Teller shared an unforgettable conversation he had with his friend, the late Kobe Bryant, that he says changed his life.

According to Teller, in a new interview with Men’s Health, he and Kobe began a friendship after he learned that the NBA great was a fan of his 2014 movie, Whiplash, after Bryant mentioned it in a 2015 interview with GQ.

Thematically, the film suggests an idea that has been mostly erased from modern popular culture: the possibility that inhumane, unacceptable treatment is sometimes essential to the creation of genius. I ask Bryant what he thought of Whiplash. “That’s me,” he says, although I can’t tell if he means the Simmons character or the Teller character. He might mean the entire movie.

Wow. @kobebryant seeing Whiplash and mentioning it in his @GQMagazine interview just made my life's highlight reel

By the way, it was J.K. Simmons’ character.

Teller, who like Bryant, was born in the Philadelphia area and eventually set up stakes in Los Angeles, shared a conversation he had with his friend in 2016 just prior to Kobe’s retirement.

“I read about where you talked about studying animals,” Teller remembers himself saying. “To learn from them and how they can conquer their environment and how predators work and how they adapt and overcome.”

The Lakers star responded, smiling. “Miles, not just animals. Plants. Start studying plants,” he said. “The world is your library.”

Teller holds this memory close to his heart. “I’m going to always remember that,” he says; gardening is now a big part of his personal life.

Also, back in 2015, Teller revealed how much of a fan he was and how much he valued Kobe’s opinion with a tweet that read, “Kobe, watched your Showtime documentary. Really related to what you’re talking about and striving for greatness and how it can oftentimes be an isolated journey, and how relationships can be a weakness in a way, if you’re really kind of going after it.”

Interestingly, Kobe Bryant wasn’t the only NBA superstar who was a fan of Teller’s Whiplash.

In 2015, none other than Kyrie Irving was writing the word “Whiplash” on his sneakers before playoff games.

Of course, Irving was only doing this because he watched the movie after he learned Kobe Bryant really enjoyed the film.

RIP Kobe “Bean” Bryant. Finding out you were a fan of Whiplash blew my mind. I couldn’t fathom being in your orbit. You were a hero of mine and I’m forever grateful for moments like this and more we shared over these past few years. Thank you for your kindness and your spirit. pic.twitter.com/3ScGQsM6zk