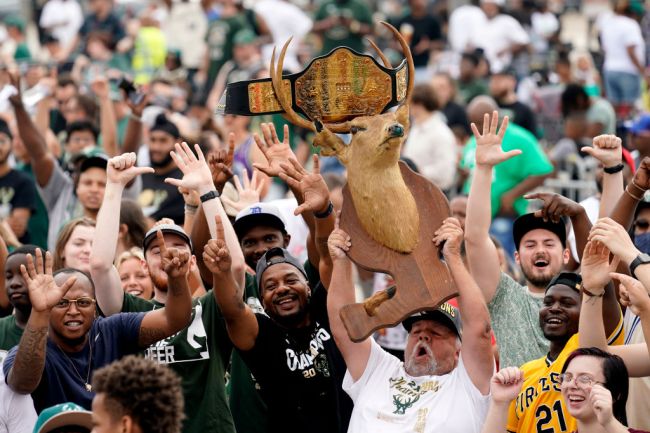 The Milwaukee Bucks celebrated their first NBA Championship since 1951 in style on Thursday. Two days after clinching Game 6 and coming back from a 0-2 deficit to claim the title, the team and the city showed out for the parade.

History has been made and the prophecy fulfilled! We are so proud of our @Bucks, so I proclaimed today #BucksInSix Day across the state as we celebrate the Bucks team and organization, their incredible season, and this historic win. #FearTheDeer pic.twitter.com/rFhP1ZPonb

To celebrate the newly-appointed holiday, the team embarked out on a 1.1-mile long parade route. Apparently, the bus driver wanted to set the tone early and was absolutely ZOOMING out of the gates.

Seriously though, why is this guy driving so fast?!

The bus driver eventually slowed down and the parade really began. Thousands of Bucks fans lined the streets as the team made its way to the Deer District.

One dude even brought his iguana…?

Dude brought an iguana to the #Bucks parade. Unexpected in Wisconsin, to be honest. pic.twitter.com/ICHZ8VDbJR

Brandon Jennings and his beers.

Meanwhile, Brandon Jennings was leading the way for the players and his former teammates. The retired NBA guard was on the Bucks from 2008 to 2013, as well as 2018, and has become something of a folk legend in Milwaukee. He was in attendance at Game 6 and had the crowd ROCKING.

Brandon Jennings in the parade 😂😂 pic.twitter.com/bB4yVpqbX9

For the parade, Jennings was out in front on the back of a pickup truck and could not stop crushing beers. It was one…

Brandon Jennings is having the time of his life. pic.twitter.com/rTCsqJ2zRx

BRANDON JENNINGS FOR THE CULTURE! pic.twitter.com/ne387DY2pX

While Jennings and his beer-chugging led the pack, the team buses followed closely behind and were getting just as lit.

P.J. Tucker was absolutely on one.

When the parade was over, Tucker gave an all-time (drunk) speech about being a dog and then chugged from his giant champagne bottle.

Head coach Mike Budenholzer was even trying to be on his level.

This is Coach Bud yelling at Tucker:

At the same time, people’s champion Bobby Portis was getting in on the dog mentality. We already know how much champagne he was drinking.

Underdog to the top dog!! pic.twitter.com/R93K0fZBct

Even if you aren’t a Milwaukee fan, it’s hard not to be excited for Giannis Antetokounmpo. He chose to stay in the city that gave him a chance instead of signing with a contender and chasing a ring with a super team. It was an admirable move and it paid off.

During the parade, Antetokounmpo was just happy that everybody else was happy.

Giannis happy to see happiness at the Bucks 🏆 parade. 😁♥️

Later on the route, he took the chance to troll his haters. Antetokounmpo was often the topic of conversation regarding his lengthy free throw routine and poor make percentage at the line. He made a point to mock everybody who doubted him during the parade.

He also took time to celebrate with the people who embraced him along his journey.

Giannis lifts the 🏆 to the crowd! 🙌

Giannis also gave the final speech of the day, and deservedly so.