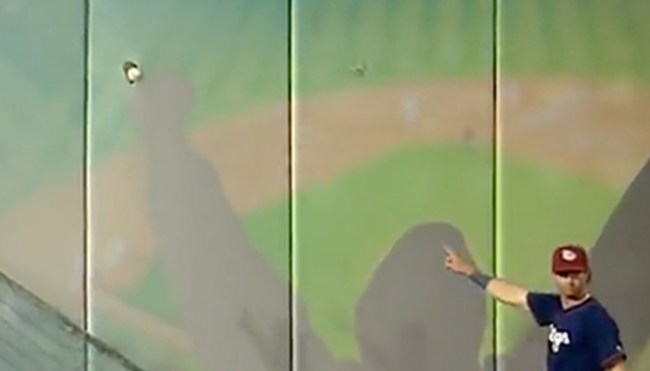 A lot of weird stuff tends to go down at minor league baseball games, but with the very notable exception of every single thing the Savannah Bananas do, most of those spectacles involve things like Seinfeld-inspired dance contests and giant inflatable mascots swallowing security guards as opposed to the action on the field.

However, there was apparently something in the water coolers at minor league ballparks across the United States on Wednesday night based on some pretty baffling plays that we were treated to.

That includes the very unconventional groundout that unfolded during a Triple-A contest between the Columbus Clippers and the Toledo Mud Hens after a player took a swing at a ball that technically landed in fair territory after becoming firmly entrenched in the dirt just a few inches in front of home plate.

“Baseballs Getting Stuck In Places You Wouldn’t Expect Them To Get Stuck” ended up being the theme of the night, as a similarly peculiar fluke occurred during a Double-A game between the Buffalo Bisons and the Lehigh Valley Iron Mutts.

It’s hard to imagine there were many fans who stuck around for the end of the game when you consider the home team headed into the bottom of the night trailing Lehigh Valley by a score of 15-3.  However, anyone who did got to witness one of the strangest hits you’ll ever see after Bisons catcher Gabriel Moreno ripped a line drive into left that was hit so hard it got embedded in the padding on the wall.

Jays prospect Gabriel Moreno smoked this ball so hard it got stuck in the wall pic.twitter.com/vqtcW9XtHy

According to For The Win, the hit (which was designated a ground rule double) came off the bat at 111 MPH, and it’s hard to imagine it was going much slower by the time it ended up in its new home based on the mark it made.