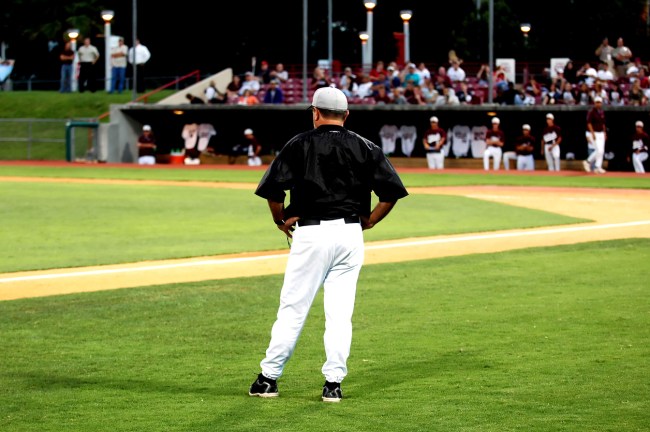 If players ever managed to actually land a punch instead of flailing wildly while waiting for a teammate to arrive on the scene to hold them back, then I’d say baseball brawls are the closest thing the sport has to hockey fights when it comes to shifting momentum in a game. As a result, when teams are looking for a spark, there’s typically only one person they look to for help: the concentrated balls of rage better known as “managers.”

Despite the fact that there’s close to literally no chance they’ll get the umpires to reconsider things, that’s never stopped managers from storming onto the field and flipping the fuck out at the guys in charge to protest a call. Most managers are perfectly content yelling in the face of a guy two inches away from them before heading back to the clubhouse but every once in a while they reach a breaking point and give us some legendary emotional explosions— like this one from Wally Backman.

Now, it appears we have one more name alongside the likes of Backman and Phil Wellman in the Manager Freakout Hall of Fame. Earlier this week, Okotoks Dawgs manager Mitch Schmidt was displeased with a call during a Canadian summer league game.

It’s not entirely clear what sparked his temper tantrum but it ended with him channeling his inner Bobby Knight and chucking a bunch of chairs onto the field in the same way guys in The World Strongest Man competition throw kegs over a bar ten feet off of the ground.

@edmontonprospects entertainment for the whole family.. might have to get some season tickets pic.twitter.com/EWmjgM1u2o

At least he didn’t choke any of his players.