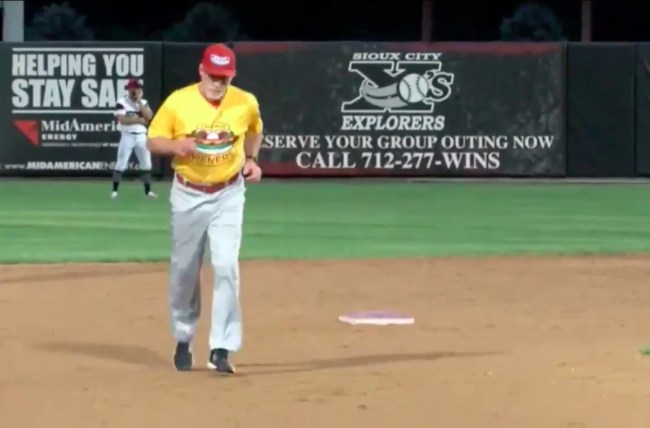 I don’t necessarily not like baseball, but I honestly have no idea how people with actual lives can manage to sit through waaaaaaay too many three-hour games to keep up with their team over the course of the season.

As a result, I don’t really bother watching games in their entirety unless I’m at one in person and there’s always at least one beer in my hand over the course of nine innings.

Thankfully (despite the best efforts of the MLB) we now live in a world where it’s easier than ever to catch baseball highlights online— especially ones from minor league games we’d never be treated to if it wasn’t for the internet.

There are really only two reasons to care about minor league baseball (not including Tim Tebow): the wacky promotions teams come up with and, more notably, on-the-field freakouts.

Over the past few months, we’ve been treated to some absolutely fantastic temper tantrums from grown men in baseball uniforms, including one who got his Bobby Knight on in a big way.

@edmontonprospects entertainment for the whole family.. might have to get some season tickets pic.twitter.com/EWmjgM1u2o

There was also the guy who let the umpire know how he really felt of him by dumping a trash can onto the dirt.

Someone's got a case of the Mondays… #SCNotTop10 @SportsCenter pic.twitter.com/FIhOJyXQbM

I thought we’d peaked after Chicago Dogs manager Butch Hobson decided to steal third base and give it to a fan.

However, Deadspin dug up another clip of a recent incident involving the skipper, who was incensed by a strike call in a game last week.

For reasons I can’t totally explain, Hobson decided to grab a bat, walk up to the plate, and “hit” a home run before doing a victory lap around the bases in one of the best protests I’ve ever seen.

The Chicago Dogs make their first-ever visit to Lawrence-Dumont Stadium tonight. Former MLB manager Butch Hobson will be with them, riding a one-game hitting streak after this "home run" last night in Sioux City 😂 pic.twitter.com/5HkHFFuRtp

The baseball season might be slowly winding down but Hobson still has plenty of time to try and top himself yet again.