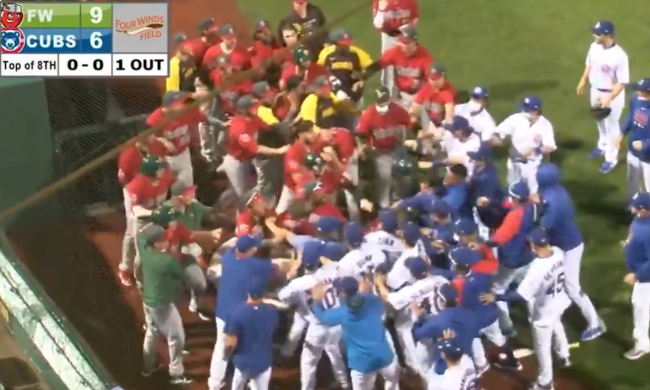 The Fort Wayne TinCaps and the and South Bend Cubs, High-A affiliates of the San Diego Padres and Chicago Cubs respectively, squared off on Tuesday night at Four Winds Field in South Bend. And by squared off, they literally came to blows during a crazy baseball fight during the Cubs’ 12-10 win.

Late in the first game of the six-game series (yes, these two teams have FIVE MORE GAMES to play against one another over the next five days), the two teams became heated when it appears someone on the TinCaps’ bench said something that Cubs shortstop Delvin Zinn did not like in the 7th inning and he had to be held back by teammates.

Then, in the 8th inning, after a Fort Wayne batter struck out, he and the Cubs’ catcher Jake Washer started chirping at one another and all hell broke loose with the dugouts emptying on to the field for a real, honest to goodness baseball fight.

The Fort Wayne Tin Caps and South Bend Cubs got in an action-packed brawl tonight pic.twitter.com/TUhAKHueL9

According to Greg Huss of the Growing Cubs Podcast, “The Fort Wayne pitcher said something to Delvin Zinn the previous inning which Delvin was upset about. Normally an incredibly fun-loving guy, you’ve gotta imagine it wasn’t something too kind from the pitcher.”

Then the “Fort Wayne batter said something to Brandon Hughes after striking out, Cubs catcher Jake Washer told him to go back to the dugout. Batter threw the first punch and then all hell broke loose.”

The league office is going to have to figure out: what was said to Delvin, what was said between Washer and Melean, who threw the gd baseball (and this should be the longest suspension) and who most actively threw punches. https://t.co/KUzCSLFc6t

Amazingly, despite things getting so wild during the brawl that a Fort Wayne player threw a baseball at someone (only to hit his own teammate), only four players were tossed as a result of the epic baseball fight: the Cubs’ Jake Washer, Brandon Hughes, Manager Michael Ryan, and the Fort Wayne batter.

There’s still 5 more games in this series this week. If there are enough players left over after the suspensions get handed out.